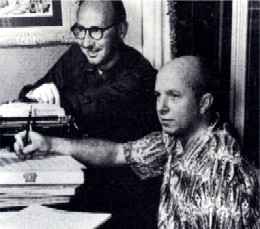 Profile:
Cahn and Van Heusen were collaborating composers and songwriters, mostly active in the 1950s and 1960s. They collaborated on several Hollywood musicals winning three Academy Awards for Best Song ("All the Way" (1957) from The Joker Is Wild, "High Hopes" (1959) from A Hole in the Head and "Call Me Irresponsible" (1963) from Papa's Delicate Condition.