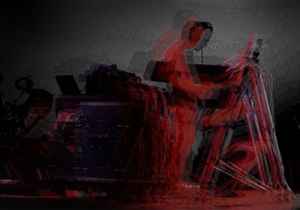 Real Name:
Amir Baghiri
Profile:
Amir Baghiri is one of the top Electro-Tribal sound designers of the contemporary electronic music community with 28 solo cds , many collaborative works and several film scores.
Amir Baghiri has composed music since 1980. During his education Amir founded and played keyboard for a band called Red Fly. Later he played as keyboards and Percussion in an award winning CBS recordings Free Jazz band The Pygmies. This band performed at several well-known places and festivals in Asia.

November 7, 2010
Amir Baghiri is an Iranian artist who explores the boundries between world music, electronic music and field recordings in a matter that results very similar to the style of Muslimgauze. After his 2003 "Yalda", Vivo puts out his new album, which turn out to be very percussion-focused overall. Some instruments used are: khaliji drums, persian tumbak, egyptian dumbak, liquid drums, bendirs, azerbaijan frame drum, surdo, mahogany pro djembes, tamborin and persian zarb & dohol drums. rababa, ouds, saz, kamancheh, panjab clay flute, native iranian ney and sipsi stone flute and various chimes, shakers, rainstick and some other forgotten objects. To that you'll have to add additive fm and analog synthesizers, processors & subliminal nature sound programming, groove programming & multidimensional ambient creations. The use of electronics in this album is remarkable becase it is mixed in subtly and yet makes for a fundamental element of the mixture. The balance between the percussive grooves and the digital rhythmical structures is so skillfully achieved that sometimes it's actually hard to tell whether or not it is in and in what percentage. The field recordings come from near eastern desert ambience and nature atmos, all recorded by amir baghiri on a sony DAT recorder in different places around asia & north africa. More technical info (such as software, hardware etc) can be found in the beautifully packaged trifold digipack. Vocals are to be found as well, but mostly as added ear candies or quasi-sampled recursive patterns, rather than lead parts. The middle eastern flavours are strong and intense in this record, you can almost smell it. Overall its grooves are pretty uptempo, which makes it easy to listen to and enjoyable.
Finally the album features some guests, including: Reza Ardalani (addtional zarb and ney), Malek Halime (distant azan, nohe khani and spoken words) and zhale mikhaili (tar, setar, additional spoken vocals as sample foods).
Reply Notify me 1 Helpful

November 7, 2010
This new CD by Amir Baghiri, called 'Ghazal', came to me as quite a surprise. I expected to hear more of the ethnic ambient that I associated with Baghiri (like the amplexus stuff). On this CD, however, Baghiri presents some very rhythmic and danceable tracks.
The tracks sound like some sort of 'pop' music from Iran, Irak, or perhaps Syria. Uptempo drum rhythms and Iranian singing form a moody and exciting atmosphere that can perhaps best be compared to the danceable releases by Muslimgauze. 'Ghazal' certainly has the same kind of 'in your face' attitude that the Muslimgauze works are so well known for. But, admittedly, the tracks are also less industrial, and far more energetic. While real 'pop' music from the middle east tends to be way too poppy (and often downright annoying), Baghiri manages to fuse 'pop' and 'classical' elements into a perfect mix.
Surprises can be very nice, and I have to say that I'm quite stunned by this album. The overall quality and atmosphere are very impressive and the beats are simply very addictive. This album reminded me of trips in North Africa and the Middle East, and is certainly one of the best soundtracks for desert travellers.
Reply Notify me 2 Helpful

November 7, 2010
I've been listening to a lot of field recordings from the Middle East recently (a number of the releases on Sublime Frequencies) and have been getting lost in the way music is so readily accessible from the street in these regions. Amir Baghiri's Ghazal opens in the same way: by submerging you in a street somewhere in the Middle East. Voices float in the background, nearly drowned out by the music and the singer's voice. "Nasime Saba" is a pop song of the street, replete with hand drums, finger cymbals, flute and the undulating siren song of a itinerant musician. You are submerged in a culture thick with a constant flood of music from hidden speakers, street musicians, distant prayer calls, and the rhythmic patter of the language. The trick with Ghazal is that everything is composed, recorded, played and mixed by Baghiri himself. Baghiri is recreating the vibrant energy of the Middle East in the studio, mixing the spontaneous rhythms of the marketplace and the city streets with carefully edited loops and field recordings. An ocean wave draws us in to "Shure Baran," a liquid wash of sound that transports us to a seaside community where a five piece percussion ensemble is banging out a rhythmic piece. It almost feels live until studio effects warp the sound, altering the rhythm and distorting the clarity of the drums. It is a Muslimgauze-like effect (a comparison which you really can't avoid when talking about Middle Eastern rhythms being distorted by authorial manipulation), but with more subtlety and less abrasiveness. The subtle field recordings wash across track divisions, lending a cohesive flow to the music as if we were sampling the ethnic music styles of the region. The ocean tide of "Shure Baran" gives way to a field of buzzing and chirping insects in "Daryaie Golfeshan," a lengthy piece that gradually winds up to a tumultuous explosion of sound before fading again into the distant burr of insect noise. "Eshragh" returns us to the street corner again and Baghiri works in cut-up loops and a persistent background crackle of insect life and whispering noise. "Sukhte Balha" builds as a duet between a water faucet and a field recording of street vendors and sing-song conversations.
And everywhere there are drums: Khaliji drums, the Persian tumbak, the Egyptian dumbak, liquid drums, bendirs, the Azerbaijan frame drum, surdo, djembes, tamborin, the Persian zarb and Dohol drums. Ghazal is a sea of drums, beats, rhythms and percussive threads which run run run throughout the tracks. Baghiri's fingers and hands are never still on Ghazal. The more I listen to Ghazal, the more I get lost in the vibrant texture and hypnotic complexity of Baghiri's compositions. Highly recommended.
Reply Notify me 2 Helpful

November 7, 2010
Like so many electronic ambient artists, Amir Baghiri keeps churning out the releases one after another. His latest work tackles one of the least understood phenomenon in our world, the world of dreams and sleep. And on top of that, trying to portray the whole feeling just in music is a feat in itself. However, succeeding where so many others have failed, in my opinion, he manages to tap into the sound that maybe our unconscious mind can listen to while we're asleep.
I want to go beyond or maybe not try to approach the whole underlying concept of this work, and just speak from one listening to it as nice ambient music. In my opinion, ambient music should create a relaxing ambience, one in which you can meditate, drift away or fall asleep to. This album is great in this way. After the first track that includes some hypnotic tribal rhythms, the music then ebbs and sways in and out through different sounds that gradually become less and less obtrusive.
Because of the nature of this work, no single track really stands out from the others, but each long mystical track blends well with the other. Finally, it all comes to a close as it slowly fades to silence.
Reply Notify me 1 Helpful

If your own resources are lacking, Amir Baghiri is here to provide potent fodder for dreams of any type... day or night, Dreamresources emits lustrous ambiance of the highest calib
The Dreamgate swings open into a primitive, beat-pummeled land where encroaching mists set the sky alight and... dogs bark? That particularly beaty realm is abandoned in favor of steamier abstractions, like the boiling gleams and shadows of A secret place; stunningly vague atmospheres swirl in varying viscocities. Equally as lovely (and intriguingly formless) are the vaporous currents of Lucid phantom ... and pretty much each of the remaining pieces!
As its title implies, Any colour you wish gives your imagination plenty of options; go wherever you want on these silken streams... is it like slow-motion cloudsurfing? Swimming through luminous jello? Uphill skiing on some otherworldly slope? Going fetal in warm embryonic fluids? Compelling Distant darkland hints at roughness, as faint rumbles scrape the otherwise-preternaturally-serene environments.
See the above descriptions and stretch them into a longer piece; the eighth track, The fifth key (16:14), unlocks even more-expansive soundscenes where barely-tangible drones whisper in longform sky-tidal passages, occasionally accented with starshine sparkles. The final flows (and ebbs) of Horama (3:57) are awash with luxurious pacing and incomprehensible beauty... so fine!
With synthesizers and restrained usage of a host of other (hardly recognizable) instruments, Amir Baghiri (with help from family and friends) spins near-nothingess into amazing amounts of wondrously oblique ephemera. Clocking in at over 77 minutes, Dreamresources makes for must-experience listening, and has graced many of my midnights... A+