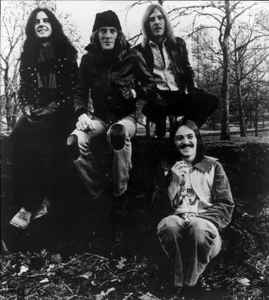 Profile:
Steve Marriott formed Humble Pie in 1968 with Greg Ridley, Peter Frampton and Jerry Shirley. Their debut single "Natural Born Bugie" became a hit in the UK Singles Chart and was followed by the album As Safe As Yesterday Is, which rose to number sixteen in the UK album charts. Their second album, Town and Country was released in the UK during 1969 while the band was away on its first tour of USA. This album featured a more acoustic sound and songs written by all four members.

During 1970 Humble Pie switched to A&M Records who released the album Humble Pie, later that year which alternated between progressive rock and hard rock. In 1971 A&M released Rock On, and a simultaneous release of a Humble Pie concert recorded at the Fillmore East New York, entitled Performance: Rockin' the Fillmore. Rock On and Performance both went gold and the loud and epic "I Don't Need No Doctor" was an FM radio hit in the USA, propelling the album up the charts.

Frampton left after Rockin' the Fillmore was recorded and was replaced by Dave "Clem" Clempson. Humble Pie moved towards a harder sound emphasizing Marriott's blues and soul roots. They recorded the album Smokin', along with two singles "Hot 'n' Nasty" and "30 Days in the Hole". It was the band's most commercially successful record and reached #6 on the US charts, helped by a busy touring schedule. A&M then realeased Lost and Found which combined two previous albums as one. Looking for a more authentic R&B sound, Marriott hired three female backing singers, The Blackberries and the more focused Thunderbox was released in 1974 and Street Rats a year later. In 1975, joined by keyboardist Tim Hinkley, Humble Pie played a Goodbye Pie Tour before disbanding.

During 1979 Steve Marriott revived Humble Pie with Jerry Shirley, adding Bobby Tench vocalist and guitarist from The Jeff Beck Group and American bassist Anthony "Sooty" Jones. Fool for a pretty face proved good enough for them to secure a recording contract with Atlantic Records. They recorded the album On to Victory which was released in 1980 . Humble Pie toured USA as part of the Rock 'N' Roll Marathon bill and recorded the album Go for the Throat. At the beginning of this tour Marriott crushed his hand, delaying earlier scheduled appearances by the band, and he later developed a duodenal ulcer forcing the cancellation of all further tour dates. Soon afterwards this line up disbanded.

Drummer Jerry Shirley obtained the rights to the name Humble Pie in 1989 and reformed the group with different musicians. This project was called Humble Pie Featuring Jerry Shirley, Shirley was the only original performing member. The band began performing concerts and was based in Cleveland, Ohio USA. This time the line up included vocalist Charlie Huhn, who also played lead and rhythm guitar. While Huhn and Shirley were the only permanent members of the group several other musicians appeared from time to time including Wally Stocker formerly of Rod Stewart's band and Cleveland guitarist Alan Greene. They developed a strong reputation as a live act in USA but never released any official studio recordings. They appeared in the line-up at the Woodstock Festival's 20th Anniversary Celebration, which was broadcast live on national television in the United States and other countries.

During 1991 when it had appeared that a reunion featuring Frampton and Marriott would happen, Shirley put Humble Pie Featuring Jerry Shirley on hold. After Marriott's death Shirley revived his band which dissolved in 1999. He re-formed Humble Pie again in 2001 with a line up including the original bass player Greg Ridley, former Humble Pie vocalist and guitarist Bobby Tench and a new rhythm guitarist Dave Colwell. They recorded Humble Pie's thirteenth studio album Back on Track, which comprised new songs and was released by Sanctuary in 2002. A brief tour of UK and Germany with Company of Snakes followed.

Humble Pie appeared at the Steve Marriott Tribute Concert held at the London Astoria during 2001. The concert featured a one of re-union line up of Peter Frampton, Clem Clempson, Greg Ridley and Jerry Shirley.