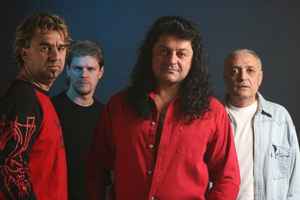 Profile:
The Compact band was founded in 1977, in Cluj-Napoca, having as members: Marius Luca - guitar, vocals; Cornel Moldovan - guitar, vocals; László Balázs “Țâlă” - drums; Constantin Cămărășan - guitar; Teo Peter - bass. They made their debut on the University Club stage. In December 1977, and participated in the ''Săptămîna = Week'' Gala in Bucharest, where they launched the song ''Spații = Spaces'', signed by Cornel Moldovan.

The first record release took place in 1982, with half an LP in the "Compact / Grup 2005 - Formații Rock 6" of Electrecord. Between 1982 and 1986, the band spends its summer seasons performing every night at the 'Tineretului' restaurant in Costinesti, the year 1982 even bringing them the First Prize at the Rock Festival ''Serbările Mării = Sea Celebrations''. It is the period of a strong rise, the group holding between 100 and 400 concerts annually.

In 1985 appears the first LP signed Compact, "Fata din vis" (Paul Ciuci-vocals, guitar, Constantin Cămărășan-guitar, Teo Peter-bass, Aurel Vasilescu-drums, Mircea Octavian Kiraly-keyboards), and also this year the members of the group Compact participate at the Dresden Rock Festival. The album "Fata din vis" was a real success, both due to the fact that it is designed and structured very well, but also due to the title track that will remain a big hit for over 30 years. The album contains both hard-rock songs (Lights in the Sky, Another Day, Legend), rock'nroll (Path Over Time), blues-rock (Another Day), melodic rock (Dream Girl, You're Everything to Me), but also 2 ballads of extraordinary sensitivity written by Constantin Cămărășan (and also sung vocally by him). 1986 was the year of touring in the former USSR and Bulgaria. On his return, Vlady Cnejevici - keyboards, a former member of the band Progresiv TM, joins the band. Cnejevici's arrival does not go unnoticed, the one who would become one of Romania's biggest flippers making his presence felt in the band's sound, so that, since then, we can't even conceive the Compact band without fantastic flap interventions.

August 11, 2022
The Compact band was founded in the fall of 1976 at the Babeș-Bolyai University's Club under the direction of Dir. Brașoveanu, the one who made possible the hosting of the Chromatic Group 3 with Sorin Tudoran, Iuliu Merca and Dan Igrețiu.
Constantin Cămărășan had a great contribution to both bands.