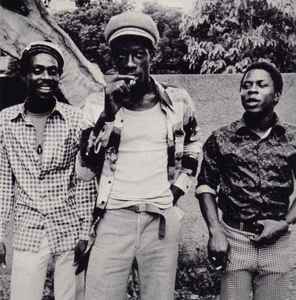 Profile:
Comprised of lead vocalist, Leroy Sibbles and vocalists Earl Morgan and Barry Llewelyn, all natives of Kingston, Jamaica. Formed in the early 1960's and originally called The Hep Ones, the Heptones played a key role in the transition between ska and rocksteady. Signed by Clement 'Coxsone' Dodd shortly after their debut they stayed with Studio One until 1971. Chaffing under Dodd's control they left Studio One to work with Joe Gibbs and in 1973 teamed-up with Lee 'Scratch' Perry to update their sound. Their first album with Perry, "Party Time", which contained new versions of many of their best Studio One tracks, gained them international popularity. Sibbles left the group in 1977 to launch a solo career.
His place was filled by Dolphin 'Naggo' Morris starting with the Niney produced albums "Better Days" and "King Of My Town".
Sites:
Wikipedia
Members:
Barry Llewellyn, Earl Morgan, Glen Adams, Leroy Sibbles, Naggo Morris
Variations:
Viewing All | The Heptones
Heptone, Heptones, Hiptones, The Hepponetts, The Hepstones, The Hepton, The Heptone