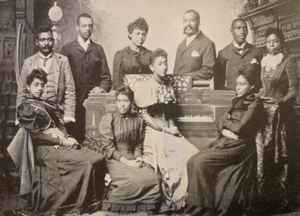 Profile:
The Fisk Jubilee Singers are young men and women, vocal artists and students of Fisk University in Nashville, Tennessee who sing and travel worldwide. The original Jubilee Singers introduced ‘slave songs’ to the world in 1871 and were instrumental in preserving this unique American musical tradition known today as Negro spirituals.

From the mid-1800s, most black institutions of higher education fielded a group of jubilee singers and/or a vocal quartet to sing spirituals. These groups toured the nation and "represented" the institution outside the local community. One of the earliest and most famous of these groups were the Jubilee Singers from Fisk University. While this Fisk group was active in the l890s, it continued on throughout the years, of course with some different members each year and a complete turnover of members within each four years. At a time when most black music was being performed by white minstrel musicians in blackface and vulgar caricature, a small group of exceptionally well-trained and talented black singers at Fisk University in Nashville achieved world-wide recognition for their stirring and very professional performance of traditional black spirituals.

Originally, the group was composed of two quartets and a pianist, a woman named Wells, under the direction of the University musical director, George L. White. In 1871 this small group set out to raise money for the struggling little university (founded in 1866). Over the next decade they had toured most of the northern states, had performed at the White House, toured England and much of Europe and had played for Queen Victoria.

The group was given its name by director White. In Old Testament history, each fiftieth Pentecost was followed by a "year of jubilee" - a year in which Hebrew law required that all slaves be set free. Organized in 1871, in the dark shadow of slavery, the "Jubilee Singers" seemed a most appropriate name. Most of the students at Fisk had been former slaves.