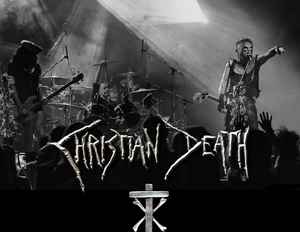 Named as a satirical play on words derived from the designer brand 'Christian Dior', Christian Death was founded by vocalist Rozz Williams, bassist James McGearty, drummer George Belanger, and a guitarist named Jay brought in from a previous band Rozz had been in called Daucus Karota. The group went on hiatus briefly in 1981, but reformed that summer with Rikk Agnew replacing Jay on guitar. Their debut album - the death-rock classic Only Theatre Of Pain was released in March 1982.

Later that year, Agnew and Belanger had left the band and were replaced by Eva O and 'China' respectively. Eva O was soon replaced by Michael Montana, and by the end of the year the band had split once again.

In 1983, Williams formed a new band with members of Pompeii 99, a band that Christian Death had played some shows with just before they had split. This new group consisted of Rozz, Valor (2), Gitane Demone, David Glass & Constance Smith. Rozz wanted to bring back the Daucus Karota name for this new band, but Valor and his European record company convinced him to retain the name Christian Death. This line-up remained more or less constant for a couple of years, although there were some problems during that time that led to stress between the members. These problems came to a head in 1985, when Rozz left the band just before a European tour. Long before the band had recorded or played anywhere as Christian Death with their newest line up, and, just as they had decided to change the name of the band from Pompeii 99 to Christian Death, all members signed a partnership agreement. This made Rozz, David, Gitane and Valor "equal partners" both jointly and severally. The terms of the agreement provided articles which would oblige any member to forfeit their rights in and to the name in the event any member should not fulfil his or her obligations. This is what Rozz did when he left. The version of the band consisting of Valor, Gitane and David Glass relocated to England and continued to record and tour until 1988 when David decided to return to L.A. with his pregnant wife to settle down and be a parent, he signed off accordingly. A settlement agreement was signed, and, later, Gitane did the same. This thereby left Valor as the sole proprietor of the business from 1989 onwards.

Valor continued with numerous session musicians until 1991, when his second wife Maitri joined the project. This new version of the group combined dark heavy metal influences with Valor's classical forays and the Gothic rock for which Christian Death remains best known.

Around this same time, Rozz and Rikk Agnew had begun playing some reunion shows in the US also using the name Christian Death, Rozz also started recording new Christian Death material with his wife (and early C.D. member) Eva O. Valor threatened legal action, claiming that he owned the band name and most of Rozz's material ended up being released under the name Christian Death featuring Rozz Williams. This version of the group came to a close on April 1, 1998 when Rozz Williams committed suicide.

During 2006 various original members of the band including Rikk Agnew, Eva O and James McGearty reunited as Christian Death 1334, however due to copyright infringement issues the group had to change their name to CD 1334. They have since split up.

July 29, 2021
"Jesus Christ Proudly Presents" is not a single. It is a compilation indeed. It should be in Compilations section.
See 1 reply

April 27, 2016
I'd like to get into this band, can anyone recommend what compilation album I should buy?
See 5 replies