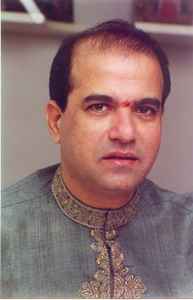 Profile:
Suresh Ishwar Wadkar (born on 7 August 1955) is an Indian playback singer. He performs in both Hindi and Marathi films. He has sung songs in some Bhojpuri films, Odia albums and bhajans and in Konkani films.

In 1968, when Suresh Wadkar was 13, Jialal Vasant encouraged him to work towards the "Prabhakar" certificate offered by the Prayag Sangit Samiti, because it was equivalent to a BEd and qualifies the awardee to teach professionally. Wadkar successfully completed his "Prabhakar" and joined Arya Vidya Mandir in Mumbai as a music teacher.
He has a music school in Mumbai, India (www.ajivasan.com) and New Jersey/New York City where methodical training is given to students. He has also started an online music school, called SWAMA (Suresh Wadkar Ajivasan Music Academy), under Ace Open University.

Though groomed for Indian classical music, he entered the Sur-Singar competition in 1976. Wadkar won the competition which was judged by composers from the Indian film industry including Jaidev. Jaidev later offered him the song "Seene Mein Jalan" in the film Gaman (released in 1978). He also performed in the film Paheli (released 1977).
At the time, Lata Mangeshkar was so impressed with his voice that she strongly recommended him to film personalities including Laxmikant-Pyarelal, Khayyam and Kalyanji-Anandji.[4] Laxmikant-Pyarelal, impressed with his voice, soon recorded a duet with Lata "Chal Chameli Bagh Mein" for Krodhi (released in 1981). Soon after, he was given the opportunity to perform for songs in Hum Paanch, Pyaasa Sawan ("Megha re Megha Re") and above all, his turning point in films – Raj Kapoor's Prem Rog (released in 1982).after that Wadkar sang many songs under the R.K. Banner and he often gave his voice for Rishi Kapoor for Heena, Prem granth, and Rajeev Kapoor for Ram teri Ganga Maili he used to sing specially for Rishi Kapoor in numerous films: Bol Radha Bol, Vijay and others.
Variations:
Viewing All | Suresh Wadkar
Sudesh, Sudesh Wadker, Suresh, Suresh Vadkar, Suresh Waadkar, Suresh Wadekar, Suresh Wadkar & Chorus, Suresh Wadker, Suresh Wakdar, Sushma Shreshtha, Суреш Вабкар, Суреш Вадкар, सुरेश वाडकर, सुरेश वाडकर,, સુરેશ વાડકર