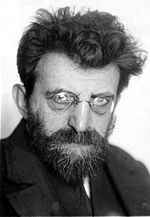 Profile:
Born on 6th, April 1878 in Berlin as a child of Jewish parents. Erich Mühsam was a German-Jewish anti-militarist anarcho-communist essayist, poet and playwright. As a political activist he was one of the members of the proclamation of the Munich Convention (Bavarian Soviet Republic), for which he was sentenced to jail for 15 years in 1919, but got amnesty after 5 years. In the night of the "Reichstag" burning in 1934 he was arrested by the nazis and murdered on 10th, July 1934 in the concentration camp of Oranienburg, near Berlin by the SS.
Sites:
muehsam.de, Wikipedia
Variations:
Viewing All | Erich Mühsam
E. Mühsam, E.Mühsam, Erich Muhsam, Mühsam