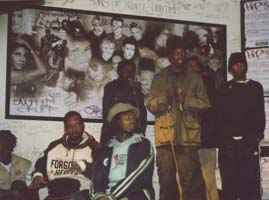 Profile:
Groundworks is a South African Hip-hop crew, based around the production skills of Kaptin, from Soweto, Johannesburg and Gemini from Gugulethu, on the Cape Flats.

The crew boasts members such as the late Hueman, an MC and producer from Cape Town, who passed away in March 2004. As well as Snazz D and Krook'd tha War Monga, two Johannesburg MC's who together with Kaptin form the group known as Audio Visual. Snazz and Gemini are both affiliated with another group known as Cashless Society as well. Non-Depiction an MC and Graffiti writer from Joburg, and member of Groundworks, is also a member of Basemental Platform, or BMP for short. Other members include MC's Forekast and S.E.L.F. from Cape Town, and Lord Bonafide from Johannesburg.

In 2002, the crew released their debut album "Demolition: The MeStory" independently via Concentration Camp.

The group released two singles in 2003, 'Dungeon Keepers' and '((stereotype))type' -- the latter is a Hueman solo track, over a beat by Kaptin, which got voted by the listeners of YFM, Bush Radio and campus stations to appear on the "Silvertab Harambe Dope Sessions" compilation.
Members:
Bonafide (4), Forekast (2), Gemini (20), Hueman, Kgotso Semela, Krook'd, Non-Depiction, S.E.L.F., Snazz D