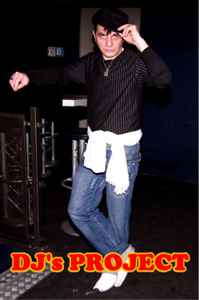 Profile:
1985 discovered the successful producer Mike Mareen in a Hamburg disco DJ and the Italian singer Silvano. With him and two other DJs, the night is the "DJ Project". The title "How are you" is 1985, and rises from 0 to number 36 in the Charts. After this great success, Mike Mareen immediately starts a PR tour of Germany. The title is the first full-length of 7 minutes in the broadcast is sent. Here the various appearances and interviews, among others, Manfred Sexauer. Thus ranks Silvano successfully lead in the league of top stars like Sabrina, Modern Talking, and so on. "How are you" is used in over 20 countries around the world played. It follows "Birthday Girl" as the second production in 1986.

Due to the continuing success touring DJs Project after a Germany. Silvano convinced his fans live on stage, and is celebrated enthusiastically. 1987 published "Vision of Love". This title is immediately placed in the Top 10 charts and claims to this day as a dancefloor hit. Silvano Pulignano, born on 8 November in the small village Massafra in Italy,
celebrates also under the pseudonym of Andrea di Lazzaro a huge success.

DJs Project remains one of the favorites of DJs. The reason: DJ Project is made by DJs.
Hits by DJs Project "How are you", "Birthday Girl" and "Vision of Love" in the scene have now already reached cult status. Nobody in the Italo Disco music titles couples as much as DJs Project.

For years, it was quiet for the Italians, but his fans have always hoped for a comeback. Silvano Pulignano has long considered, but now for a determined comeback.

Therefore, 2008 is now nearly 23 years after the comeback of DJs Project. Bernd Schöler, a founding member of DJ Project, and PE: sch, even from the start as a songwriter with it, producing the song "Vision of Love" and "Only for Love".