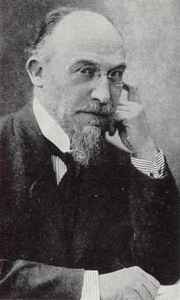 Erik Satie, was a French composer and pianist. A colourful figure in the early 20th century Parisian avant-garde, he referred to himself as a "phonometrograph" or "phonometrician" (meaning "someone who measures (and writes down) sounds"), preferring this designation to that of "musician," after having been called "a clumsy but subtle technician" in a book on contemporary French composers published in 1911. Later, from the 1940s on, predominantly John Cage presented Satie's work as that of an inventor of a new and modern musical expression, and so he was slowly rediscovered and became a precursor to artistic movements such as minimalism, repetitive music, ambient (called "Furniture Music" by Satie) and the Theatre of the Absurd. In addition to his body of music, Satie also left a remarkable set of often humorous and witty writings.
Sites:
erik-satie.com, Facebook, Wikipedia, imdb.com, britannica.com
Variations:
Viewing All | Erik Satie | Satie
Alfre Leslie Erik Satie, Alfred Erik Leslie Satie, E Satie, E. Sarti, E. Sati, E. Satie, E.Satie, Eric Sati, Eric Satie, Erick Satie, Erik Alfred Leslie Satie, Erik Alfredi Le Satie, Erik Alfredi Leslie Satie, Erik Saitie, Erik Satie Et Autres Messieurs, Satie Erik, Satie, Erik, Érik Satie, Сати, Э. Сати, Эрик Сати, エリックサティ, エリック・サティ, サティ, サティー

November 26, 2017
I will buy Satie's Gymnopedies and Gnossiennes Lp. Has someone there?
Reply  See 1 reply Notify me 1 Helpful