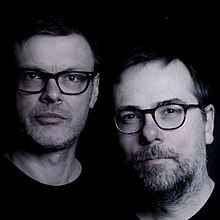 Profile:
Plone formed in late 1996 in Birmingham, where they started gigging, supporting other local bands Broadcast and Pram. In September 1997 they released the single "Press A Key" after being approached by Keith Jenkins (8) of Wurlitzer Jukebox. Snapped up by Warp on the strength of this single they introduced themselves with "Plaything" on the "WAP 100: We Are Reasonable People" compilation and played live at John Peel's Meltdown festival. In September 1998 "Plock", their first single release for Warp, brought about much critical acclaim. They began to build collections of old drum machines, analogue synthesizers, and effects. Their musical influence came from music that has shown an imaginative and loose sense of technological experimentation whilst retaining a pop sensibility.
Sites:
Bandcamp
Members:
Mark Cancellara, Michael Johnston, Mike Bainbridge

November 20, 2003
Much under-rated Warp artists, and fellow brummies :) Plock is undoubtibly their finest release, along with their excellent remix of the classic tricky disco! Now after getting dropped by warp ?!?!? they have gone their own ways, and mike has formed mike in mono who are going to have a big future in the electronic world with their spectrumesque melodies and crunchy beats. Goodbye Plone.....Long live Mike in Mono!!!
Reply Notify me 1 Helpful

For fans of Air and /or Jean-Jacques Perrey. Sweet wackiness from start to finish. Never groundbreaking, but highly enjoyable nevertheless. 'For Beginner Piano' is their best work to date. (aug 2001) - Mil