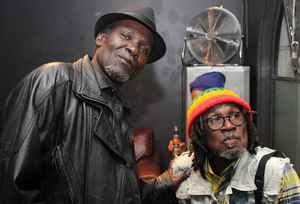 Profile:
First comprised of Winston 'Pipe' Matthews on lead vocals, Lloyd 'Bread' McDonald, and George 'Buddy' Haye, the Wailing Souls carried the moniker of the Renegades during the late 1960’s. This line-up recorded backing vocals for an Ernest Ranglin album before breaking up in 1968.
'Pipe' and 'Bread' teamed up with two other singers after that, Oswald Downer and Norman Davis, and they went on to work with Coxsone Dodd's famous Studio One label recording label. They recorded a number of singles there, and were also billed as the Classics, in addition to their Wailing Souls name.
In the early 70's, the Souls recorded for Bob Marley's Tuff Gong label, as Pipe and The Pipers. The group’s vocal power, and song writing ability has kept the group in the spotlight, and in 1974 the group changed again when Downes and Davis left and 'Buddy' Haye rejoined.
The group entered another era of their careers as they began work with famed producer "Jo Jo" Hookim and his Channel One label. The Souls then started their own label in 1977, Massive. In the early 80's the now quartet (with the addition of Rudolph ‘Garth’ Dennis from Black Uhuru fame) worked with a number of hot producers including Sly and Robbie, "Junjo" Lawes' and Linval Thompson.
Sites:
Bandcamp, Bandcamp, imdb.com, Facebook, Wikipedia
Aliases:
Attamas, Matsimela, Pipe & The Pipers, The Classics (12)
Members:
George "Buddy" Haye, Lloyd "Bread" McDonald, Norman Anthony Davis, Oswald Downer, Rudolph "Garth" Dennis, Winston "Pipe" Matthews
Variations:
Viewing All | Wailing Souls
Soul Dimensions, The Wailing Soul, The Wailing Souls, The Wailing Souls), The Walling Souls, W. Matthews & L. McDonald, W. Soul, W. Souls, Wail Souls, Wailin Souls, Wailin" Souls, Wailing Soul, Wailing Souls, The, Wailing Sound, Waling Souls

May 30, 2021
This classic roots harmony group is not well-served by vinyl reissues these days. While the excellent Firehouse Rock and other Greensleeves releases are generally available, and used copies of the self-produced and very fine Wild Suspense record are fairly plentiful, other high points in their career are increasingly difficult to find. Many tracks on the early Studio One record are available on various Soul Jazz (and other) comps, but the album itself is hard to find and pricey. The Pressure Sounds collection of their mid-70's output for Channel One has long been out of print, and at this writing is not offered on Discogs (when it is, the price is crazy high). The Linval Thompson-produced Wailing is also waiting to be reissued, even after the many reissues of Thompson material in recent years by Hot Milk and Iroko.
Reply Notify me 1 Helpful