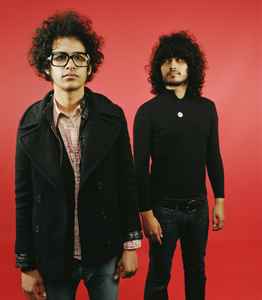 May 2, 2021
Be careful! This one is full of scratches and gouges. Mike from the Ingroove in Phoenix, AZ just opened one and half the records were defective. Terrible! Fair warning!
See 1 reply

Why isn't anyone posting the box set on here? Plenty of people have already received it.

"La Realidad De Los Sueños" is literally "the reality of dreams" for the numerous The Mars Volta fans all around the world. It not only contains the band's whole studio discography but also some true treasures like "Landscape Tantrums", unreleased material from the De-Loused In The Comatorium Sessions and a photo-book with exclusive behind-the-scenes shots. The 18 LP set is limited to 5.000 copies, pressed on 180 gram black vinyl and comes with a characteristic and The Mars Volta-esque designed box. Rack included and ready-made for a perfect presentation. Including the studio EPs / albums:

Landscape Tantrums
Plus the unreleased versions from the De-Loused In The Comatorium session:

A Plague Upon Your Hissing Children
Eunuch Provocateur
And:

January 29, 2013
Wondering why their live promo "Is Anybody There?" isn't on this page. The record is listed but just doesn't show up here.
See 4 replies

September 12, 2008
The Mars Volta is a creative force to be reckoned with. One of the best live bands in the past few years, and musical talent up there with the greats from the annals of history, The Mars Volta is a gift to those who love the joys of psychedelic and progressive rock. I half-jokingly refer to them as the "Gods of Music" and must say the more they release, the more i believe it.

i first got hooked, as many did, on De-Loused In The Comatorium. Ever since that album guitarist Omar Rodriguez-Lopez has produced every subsequent release and they have been less and less "over produced" and more and more "raw and visceral."

Their most recent endeavor, The Bedlam In Goliath was an epoch in my musical life, and it will join their others in superb greatness.

Fans of The Mars Volta seem divided, some only love De-Loused and hate everything released prior, some love all the later released records more than De-Loused. Now i must say De-Loused is a completely amazing record, but i must say they have really been able to grow into their own musical skin moreso in their subsequent releases and i could be nothing but pleased.

Until they release something they didn't put their hearts into (which i never see coming) i can definitely say I will forever be a fan of The Mars Volta.
See 1 reply