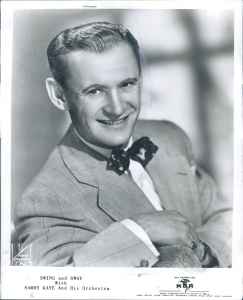 As a freshman at Ohio University in Athens, OH, Kaye formed a trio called "Sammie's Red Hot Peppers", in which he played the banjo. Later, he even opened his own night club near campus, the "Varsity Inn". After graduating in 1932 with a B.S. in Civil Engineering, Kay switched to clarinet and formed a new band, "Sammie Kaye's Ohioans," a sweet dance band with which he toured the Midwest for several years. His breakthrough came in the mid-1930s. Playing the Cabin Club in Cleveland, Ohio, Kaye devised a clever way to introduce his band on radio broadcasts, "Swing and Sway with Sammy Kaye." That slogan stuck, and the band became known under this name. In 1938, Kaye moved his band to New York where he became a staple on the NBC radio show "Sunday Serenade" for the next twelve years.

Kaye cut more than 1,300 recordings with his band, starting with several titles on the Vocalion (2) label in 1937. Between 1938 and 1950 he recorded for Victor, then switched to Columbia.

Apart from his band's theme song, "Kaye's Melody", Kaye composed numerous other songs. Best known were "Until Tomorrow (1940), "Remember Pearl Harbor", "Hawaiian Sunset" (both 1941), and "Wanderin'" (1950), all of them published by his own publishing firm, Republic Music.