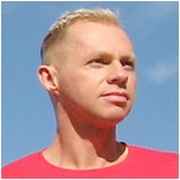 Profile:
Since the Mid 80’s, Australia’s dance party culture has been shaped by the sounds of Mark Alsop. From its humble beginnings to the richness of today’s party and clubbing culture, Mark has remained in the forefront of this dynamic environment. He has commanded DJ boxes in many of Australia’s East Coast nightclubs and parties and continues to impress with his style, diversity and adaptability.
He has shaped the Australian circuit party scene, and wooed patrons at warehouse parties such as Paradise Garage, Bacchanalia, and Sweatbox, as well as such International events as the Sydney’s Gay and Lesbian Mardi Gras (2016) and SGLMG “Sleaze."(1989) He was the only DJ to hold residency at the infamous Paradise Garage parties and appeared recurrently at the Internationally acclaimed “Frisky” "Toybox" "Inquisition" & "Honey" parties.

In addition to his widespread DJ experience, Mark has done edits and additional production for many labels including: Hot Tracks, Pride, Zomba, Discotech, Factor 3, Ace DJ remix and Central Station Records. Locally he has been featured on Zomba, Central Station Records, Pride and Colossal recordings. Marks remixing and editing work is initially released in Australia and the United States, and has been subsequently distributed globally.