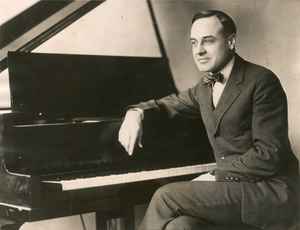 Real Name:
Harry Runkle Auracher
Profile:
Broadway songwriter (from the 1910s to the 1940s), pianist & bandleader who was born in Creston, Iowa, on February 21 of 1886 as the son of a plumber & a classical pianist.
His very first published compositions were published under the name of Harry R. Auracher, and it included tunes such as "Love Me Is All I Can Say", "Both of Us", "My Tribute", "I Want Some Old Style Lager", "I Like to Have a Flock of Men Around Me" & "Switchback Rag". He composed his first musical play under that name that was titled "The Pearl Maiden".

He changed on 1920 his name to the more well-known artistic name of Harry Archer, and it was there where his success came after writing musical plays with Harlan F. Thompson ("Little Jessie James", "My Girl", "Merry Merry", "Twinkle Twinkle", "Daddy" & "Heels Together") & Walter O'Keefe ("Just For A Minute"), in addition to leading a band that recorded for Brunswick (and it's now subsidiary Vocalion) from 1926 to 1928, with former Earl Fuller & Ted Lewis pianist Ernie Cutting as his musical director & featuring some well-known sidemen such as alto saxophonist Larry Abbott, tenor saxophonist Jim Crossan, violinists Arthur Childs & Reggie Childs (then performing with Archer's band under the name of Reginald Childs. He formed a band later known as Reggie Childs And His Orchestra) & tuba player Johnny Porpora.