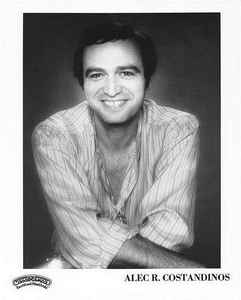 Real Name:
Alexandre Garbis Sarkis Kouyoumdjian
Profile:
Born 1944 in Cairo, Egypt. He was the king of the eurodisco sound in the 1970's. Alec wrote for and produced many disco artists including Love and Kisses, Don Ray, Tony Rallo, Cerrone, Paris Connection, Sphinx, Sumeria and Alan Hawkshaw.

Alec's "solo" albums contain some of the greatest eurodisco tracks of all time. His albums often had a historical or classical theme, the best known of these being "Romeo and Juliet", which was used in the disco movie "Thank God it's Friday" (although it was not on the soundtrack album).

He composed a string of hits for greek singer Demis Roussos in the mid-seventies, among those “Forever and ever”, “My friend the wind” and “Velvet mornings”.

His film scores included Trocadero Lemon Blue, containing the classic "Trocadero suite" and the brilliant "Grooves (introduction)". The film is based around kid's roller skating life in Paris in the 1970's.

"The Hunchback of Notre Dame" follows in the footsteps of "Romeo & Juliet". These bouncy basslines and thumping disco beats are Alec's trademark; for an example, listen to the introduction to "Winds of change". This was another film score he did for an obscure feature-length animation.

December 31, 2020
Hard to believe it's been over 40 years since this music was released but it still sounds as good today as it did on the dance floor back then. The only official release that I'm aware of is the Unidisc greatest hits selection which only has a few songs and Accidental Love is cut in half which is highway robbery. Would be great to see an official release of all LP's in one box set with 12" versions and edits. I thought I'd do a search on iTunes to see if anything was available and was QUITE surprised to see a song entitled "Fifty Four" from 2020. It has a sound very reminiscent of the work from the 70's. Not listed here but hopefully there is a full length album in the works, please!!!
See 1 reply

May 5, 2019
No one in Love with this guys gorgeous slabs of 12'' Vinyl ?
They are way past 'songs' and are a OK VERY Discotastic 'trip' on each side but Why Not ?
Trocadero Suite has a very strange what sounds like an Orchestra playing a scratch on a record ??
I'm sure it's not though.
Still not m-any official CD's ?
Why not ??
See 2 replies