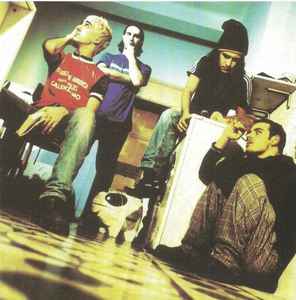 Profile:
Frontman and main songwriter of the band Umberto Palazzo (b.1964) has his musical roots in the 80’s neo-psychedelic scene, playing in garage rock band Ugly Things and in Allison Run of Amerigo Verardi. Some years later, as founding member of Massimo Volume, he played on the recording of the band’s first album, Stanze (1993) with writing credits for some of the songs. By the time the album was launched however, Palazzo was already out of the band looking for new stimulii.

He found it in Bologna, starting his new band, Il Santo Niente, with Fabio Petrelli on bass and Cristiano Marcelli on drums (guitarist Salvatore Russo would join the band for their second album). Thanks to his friendship with Gianni Maroccolo their first album, La Vita e’ Facile (1995) came out on Consorzio Suonatori Indipendenti - a much respected label for new Italian rock. In the same year Il Santo Niente appeared on the Materiale Resistente compilation with Wir Sind Partisanen, released by CPI/Dischi del Mulo.

Inspired by the blunt sounds of Sonic Youth, The Melvins, Nick Cave, and Nirvana, the band’s sound creates a harsh, noir atmosphere expressed by a rock language with no compromise - an electric whirl ironically defined by Palazzo himself as “porno-grunge”. Their lurid, urban texts are in the vein of Hubert Selby Jr. Audiences and critics alike were drawn to the band, unique in the musical panorama of that period.

The promising beginnings strengthened two years later when Il Santo Niente released Seinaru Mono Wanai, Il Santo Niente in Japanese. Critics have described it as a “pulp-rock” album. In the same year the band composed songs and selected other songs for the soundtrack of the film Jack Frusciante è uscito dal gruppo (Jack Frusciante Left the Band) directed by Enza Negroni and inspired by the novel of the same name by Enrico Brizzi.

Il Santo Niente toured relentlessly from 1997 through to 1999. Palazzo then suddenly called an end to the band. There is speculation that tiredness and some disenchantment had set in. The following five years Palazzo devoted himself to DJ-ing and immersing himself in electronic music.