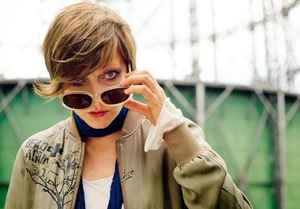 Real Name:
Birgit Dieckmann
Profile:
Born Hamburg, Germany 1970. Billie Ray Martin first found fame in Electribe 101, with the dark electronic soul singles 'Tell Me When The Fever Ended' and 'Talking With Myself'. Electribe 101 held much promise but the group split after just one album.

Billie's first solo release was a dark electro-chanson reworking of Throbbing Gristle's 'Persuasion', with the techno duo Spooky in 1993. It was followed by the '4 Ambient Tales' EP with The Grid, a trip into gentle ambient blues. Next year, the techno/soul/pop stomper 'Your Loving Arms', written with David Harrow (aka James Hardway), produced (again) by The Grid and remixed by Junior Vasquez, crossed over from the clubs to the radio and gave Billie her biggest hit.

Billie's first solo album 'Deadline For My Memories', produced mainly by BT, comprised of catchy technopop and big torch ballads. The album and the singles taken from it didn't match the chart success of 'Your Loving Arms', resulting in the collapse of artist/label relationships and Magnet/EastWest dropping Billie. All official BRM and Electribe videos were compiled on 'The Videos 89-98' DVD in 2008.

Billie then moved to New York, to work on her drum'n'bass Sonnenstahl project, writing and recording with Vinny Vero and Fred Jorio, and recording a country/soul album with Jon Tiven (released 2016). The Sonnenstahl recordings were released in 1998, against Billie's wishes. More successful was the Jorio co-written 'Honey', which topped dance charts in 1999, supported by big name remixes and a new contract with React. The second single 'Don't Believe A Word' remained unreleased, however.

During the stay in the US Billie laid foundations to the 2001 album '18 Carat Garbage', which was the culmination of her dream to record in Memphis. Production was by Lunatek and Felix Huber of Plexiq. Remix and demo albums were also released.

Billie's search for suitable collaborators has resulted in various featured appearances. Already in 1989/90 she appeared on releases by S'Express and Julian Jonah. A few years later, she could be heard (uncredited) on tracks by the Italian dance acts Datura and Individual. As a songwriter and backing vocalist she's made contributions to Candi Staton, Jon Tiven Group, Wilson Pickett and Shemekia Copeland. Billie's 'Your Loving Arms' has received many cover versions, the most successful being that by Karen Overton.

Via Bandcamp Billie has also made available many exclusive recordings such as an early 80s live set by Billie And The Deep, unreleased demos and first tracks to be included on the forthcoming album 'Gezeitenraum'.