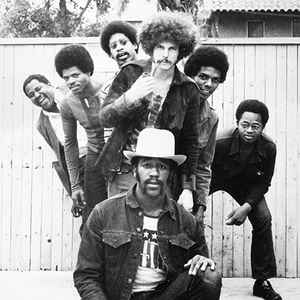 Profile:
Funk group that started life in the early 1970s in Southern California. They formed out of the ashes of an earlier R&B covers group, The Creators (6) (who also recorded as The Romeos and Señor Soul), initially naming themselves Nightshift before producer Jerry Goldstein discovered them and gave them a more distinctive name.

Their initial recordings were collaborations with Eric Burdon of English group The Animals, notably their first album 'Eric Burdon Declares "War"'. They later signed to United Artists and began releasing material on their own. Their first album was not a big success but their popularity was growing and later albums were very successful. They peaked commercially in the mid-70s with their Number 1 hit 'Low Rider'. Four members of the classic lineup from the 1970s have formed a new band (for legal reasons) called Lowrider Band.

Things started to go downhill for the group in the late 70s when bassist B.B. Dickerson left and another member, Charles Miller, was murdered. Various line-up changes followed but the original magic was lost and the group were not as successful, eventually becoming just a touring act.

A new generation has since discovered the music of War as they have been heavily sampled by hip-hop artists. The band continues to tour, although with only one of the original members.