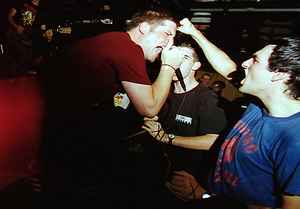 Profile:
American straight edge hardcore-punk band formed in Richmond, Virginia, active 1997-2003. Originally called "What The Fuck", the band changed their name before playing their first show in December of that same year. In February of 2003, after touring Europe, Count Me Out returned to Richmond and played an unannounced last show.