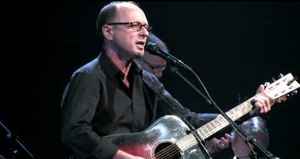 He later became a singer and, among other things, interpreted Владимир Высоцкий (Vladimir Vysotsky).