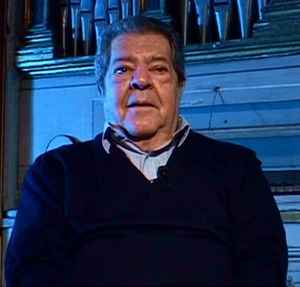 Born in Rome, he studied composition at the Neapolitan Conservatory "S. Pietro a Majella" under the direction of M° Achille Longo then proceeded to study orchestra direction at the Chigiana Academy in Siena with Paul Van Kempen and Franco Ferrara. He also graduated in horn, after having studied with Domenico Ceccarossi. He then took part in the "A. Scarlatti" Orchestra of Naples and in the Rome Symphonic Orchestra of RAI TV. In 1968 he won the "Review" award of young conductors sponsored by RAI, and since then he has been very active in conducting concerts and operas in Italy and abroad. In 1974 he held the chair of orchestra rehearsals at the Conservatory "S. Pietro a Majella" in Naples where, since 1983, he has been teaching orchestra direction. He has been teaching at the "S. Cecilia" Conservatory of Rome since 1989.
He has recorded many discs with music by Boccherini, Mozart, Ciaikovsky, Honegger, Chausson, Beethoven, C. Nielsen, V. Caracciolo. He is the director of the "Roma Symphonia" orchestra. In the field of film soundtracks he began his activity in the 1950s composing music for a few documentaries and feature films. In 1955 he attended a course in film music taught by Angelo Francesco Lavagnino at the Chigiana Academy in Siena, and later became his assistant, collaborating with him on several major films. In 1957 he started his collaboration with Folco Quilici, first on some documentaries, then on the following films: "Dagli Appennini alle Ande" followed by "Ti-koyo e il suo Pescecane" and on several TV series such as "Firenze 1000 Giorni", "L'Uomo Europeo", "Festa Barocca", "Grandepoque", "Archivi del Tempo", "Le Avventure del Capitano Cook", etc. He has composed scores to hundreds of cinematographic and TV documentaries and to more than 250 films, especially historical films and westerns, in Italy, Spain, Germany and the U.S.
Sites:
web.archive.org, web.archive.org, Wikipedia, imdb.com
In Groups:
Francesco De Masi Orchestra
Variations:
Viewing All | Francesco De Masi
De Masi, De Mosi, DeMasi, Diretta, F. De Masi, F. de Masi, F.De Masi, F.DeMasi, Fracesco De Masi, Francesco DeMasi, Francesco Demasi, Francesco Massi, Franco de Masi, Sound Track