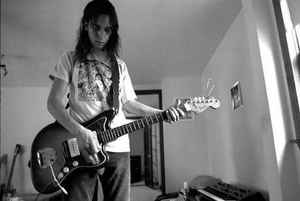 Real Name:
Joseph Donald Mascis
Profile:
Best known as the remote frontman of the influential indie trio Dinosaur Jr., J Mascis was also an occasional producer and film composer. Born December 10, 1965 in Amherst, Massachusetts, he first emerged as a member of the hardcore unit Deep Wound, founding Dinosaur in 1984. Over the course of acclaimed LPs like 1987's You're Living All Over Me and 1988's Bug, the group emerged among the most highly regarded in alternative rock, with J Mascis' creaky, Neil Young-like vocals and monolithic guitar leads becoming primary influences on the burgeoning grunge movement. The group temporarily disbanded in 1989, largely to allow the legendarily non-communicative singer the opportunity to dismiss bassist Lou Barlow, who went on to form Sebadoh; in the meantime, J Mascis sat in on drums with a series of bands, among them The Velvet Monkeys and GobbleHoof, even producing the latter's eponymous 1990 LP. Upon re-forming Dinosaur Jr. in 1991, he scored Allison Anders' independent film Gas Food Lodging a year later, making a cameo appearance in the picture itself; he and Anders became regular collaborators in the years to follow, most notably on her feature Grace of My Heart. In the meantime, J Mascis also produced records for pals including fIREHOSE (Mr. Machinery Operator) and Tad (Inhaler), and in 1996 issued his solo debut Martin and Me. After 1997's Hand It Over, Dinosaur Jr. disbanded. Keeping on with his personal musical eclecticism, J Mascis and his new outfit J Mascis + The Fog issued More Light in fall 2000. Featuring appearances from avant garde guitarist Kevin Shields and Guided By Voices vocalist Bob Pollard, the record was a fine return to form that excited Dinosaur Jr. fans who had been disappointed with his acoustic record. A tour with Elf Power followed, featuring longtime friend Mike Watt on bass and The Stooges guitarist Ron Asheton at several tour dates. It was his riff-heavy jams with Asheton and Watt that inspired much of the music he started writing for his follow-up, as well as several skydiving experiences. When he stepped back into the studio, he kept the guest appearances down to a minimum and recorded Feel So Free for a 2002 release. DInosaur Jr. reformed with its original lineup in 2005, and have released 4 studio albums since.
Sites:
jmascis.com, Wikipedia, Facebook, instagram.com, Twitter, YouTube
In Groups:
Action Swingers, Deep Wound, Dinosaur Jr., GobbleHoof, Heavy Blanket, J + Friends, J Mascis + The Fog, Porn (2), Sweet Apple, The New York Superscum, The Velvet Monkeys, Unknown Instructors, Upsidedown Cross, Witch
Variations:
Viewing All | J Mascis
J, J Maskis, J Muscis, J. Mascis, J. Mascis (Dinosaur Jr.), J. Masics, J.Mascis, J.Masols, Jay Mascis, John Mascis, Joseph Donald Mascis Jr., Joseph Donald Mascis, Jr, Joseph Mascis, Joseph Mascis Jr., Kopf J. Mascis, Mascis, Mr. Mascis

March 23, 2021
Around 10 years ago Mascis came in the record shop I worked in. Hard to mistake him. He sort of sidled up to the counter and stood there rather awkwardly. I acknowledged him as a potential customer with a nod and a smile but no more than that. I was going to engage him in conversation but I remembered his reputation as a man of few words so I just got on with what I was doing and eventually he went away. True story.
See 1 reply