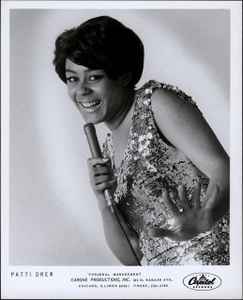 Real Name:
Patricia E. Drew
Profile:
Soul singer and songwriter who achieved modest chart success in the late 1960's with Capitol Records. Born December 29, 1944, in Charleston, SC, Drew grew up in Nashville, TN, and later moved with her family to the Chicago suburb of Evanston, IL. During her teens, she attended Evanston High and sang with her mother and sisters in church. Her mother was a domestic worker whose employer, Maury Lathowers, was the regional promoter for Capitol Records. She invited Lathowers to come to her church to hear her daughters sing and, impressed, he invited them to his home for an audition and got the group a deal with Capitol, signing the group as the Drew-vels. They first recorded "Tell Him" which was written by Carlton Black (and not to be confused with "Tell Him" by The Exciters). The single release was a local hit and scraped the lower echelons of the national charts. Drew signed as a solo artist to Quill Records in 1966 and soon after moved up to Capitol, issuing a new recording of "Tell Him" as her first single. It was a modest success and was the first of three charting singles. She released three albums before leaving the industry in 1971, though she resurfaced with a release on Carl Davis and E. Rodney Jones' Innovation II Records in 1975. During the '80s, she reunited with Carlton Black in the group Front Line and performed around the Evanston area.
Sites:
Wikipedia, soulfulkindamusic.net, shorefrontjournal.wordpress.com
In Groups:
Drew-vels
Variations:
Viewing All | Patti Drew
P. Drew, Patty Drew