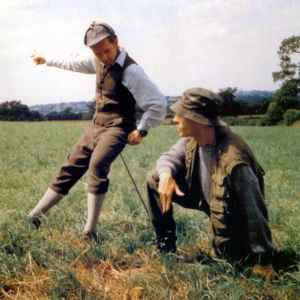 Profile:
Tim Hutton and Thomas Melchior formed Vulva in 1993 in England. The experimental techno duo signed with the Rephlex label (home of Aphex Twin) and released From the Cockpit in 1993. Vulva's first domestic release was the Mini Space Vulvette EP, for Reflective Records. After a side project for the German Source label called Yoni ("Yoni" and My Little Yoni), Hutton and Melchior released their second full-length for Rephlex, Birdwatch, in 1996. Vulvic Yonification followed in late 1997.
Aliases:
Deepah, Yoni
Members:
Thomas Melchior, Tim Hutton

March 4, 2020
If Black Dog had a cousin these guy's would be it. Quirky electronica proto-idm that you definitely can shake your monkey butt too. All made with lo-fi simple gear. I bought Birdwatch on vinyl back in the early 00's. I didn't even like vinyl back then but I would buy the vinyl only releases if they were from the label I respected. This purchased paid off greatly. Now 20 years later I have a mint copy of Birdwatch to groove out on.
Reply Notify me Helpful

Music that should be everyone's Techno music collection! Every album a little gem, esp.for lo-fi Acid House-Techno-IDM music. Also Yoni aka Vulva, with their excellent and only album: 'My Little Yoni'.

January 12, 2019
Forward thinking and inspiring producer. They were years ahead. Hopefully there is still some left material out there
Reply Notify me 2 Helpful