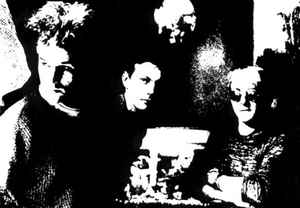 Profile:
Originally intended as an outlet for Bauhaus guitarist Daniel Ash to record his more experimental material, Tones On Tail surfaced in 1982 with a self-titled 12" EP on 4AD Records. Fuelled on a steady diet of hash and Big Macs, this musical offshoot became the psychedelic and light-hearted antithesis of Bauhaus' gloom and doom reputation. Danny was initially joined by Glenn Campling on bass & keyboards, and, with the subsequent demise of Bauhaus in 1983, drummer Kevin Haskins, turning this 'side-project' into a 'proper' band.

During their short tenure together, Tones On Tail created some of the most inventive, arresting and tongue-in-cheek "pop" music until the group disbanded after an US Tour in late 1984. Ash and Haskins went on to reunite with their Bauhaus bandmate David J in Love And Rockets in 1985.
Sites:
fulori.com, MySpace, Wikipedia
Members:
Daniel Ash, Glenn Campling, Kevin Haskins
Variations:
Viewing All | Tones On Tail
Tones On Tails, Tones On Tale

It boggles my mind that even Bauhaus fans at times ignore this wonderful side project by Daniel Ash (their ex-guitar player), Glenn Campling and Kevin Haskins. It's a one of a kind blend of post-punk, psychedelic rock, punk and gothic rock. The most cool thing about this kinda one-off endeavor is an attempt to constantly try something different in each song with all the instruments and experiences given.

As a result many of the Tones On Tail releases were spread out on various singles and EPs. The band was clearly exploring new grounds during their "root phase", so the first EP "There's Only One!" was just a dark punk in the vein of 80's, then things started to get sorted out, once Ash and Glenn decided to stick to part-goth, part-psychodelic aesthetics in "Tones of Tail" 1982 EP. Afterwards Haskins has joined the duo during "Burning Skies" EP, which then has led to their brief-but-beloved work on the full-scale album and absolutely essential "Christian Says" single with a song "Twist" attached to it.

I've described their release progress in details, because most of the stuff can be obtainable via digital version of the "Everything" CD. It's a nice package for sure, but after listening to the original vinyl rips i can't shake off a dazzling feeling that this compilation is wobbly compressed, feels like you are listening to all of these audio treasures with a freakin' pudding in your ears. Fortunately, all the original vinyls are dirt cheap, plus there's a 2nd compilation called "Weird Pop" being released in 2011. What makes the latter even more valuable is the addition of the studio version of "Heartbreak Hotel" instead of that terrible live bootleg, also a more dram machine-oriented "Performance" song. This edition would have been perfect if not for the annoying inclusion of the extended mix for "Twist" from the "Something" promo CD. Don't get me wrong, it's a solid track to have an extended mix, but it's clearly worse than the original - my favorite Tones on Tails song in fact, that's why it matters so much in my eyes. Lastly, 2020's/2021's remaster of the "Pop" album is without a doubt the best way to experience ToT. It was based on the original master tapes, they sound almost 3D-like, which is what you expect from a quality re-release.

As about the music itself i think it's a fascinating 80's specimen. ToT songs have a lot of expressive gothic poetry with various shades. One time they can be a wild horror fest (songs in style of the "Burning Skies", "Slender Fungus", "Means of escape") with all these creepy studio effects, processed vocals by Daniel and a hauntingly dominant rhytm-section coming either from Ash's electro guitar or the bass one from the Campling's hands.
Another time it's a wonderfully creative psychedelics, whether such stuff revolves around uncommon instrumental decisions (believe me, they will become quite irreplaceable in your mind from the first listening) or completely surreal lyrics in songs like "Twist" and "A Bigger Splash", the synergy of the latter aspect with gothic rock is what's made Tones Of Tail so one of a kind for me. The thought process behind all of that is so exceptionally versatile, that the band feels like it came from another planet.
The next interesting feature about this collective is somewhat punky dark satire with a focus on not only cleverly and witty lyrics, but a striking use of their electronic instruments. Songs like "Go!", "Performance", "War" are such a stylish example of stating a serious message, while using danceable synth and drum-machine rhytm-sections. And, by the way, these synth melodies in the "Rain" are totally mimicking the rain feeling itself similar to the "Riders on the Storm" by "The Doors". What's not to love?!

Suffice to say, the lyrics alongside with the explored themes is a brilliant part of Tones On Tail too. I can talk for hours how each text is jam-packed with effective metaphors, unchained artistry, precise analogies and just mind-shattering visions to play with your imagination. "Real Life" and "Rain" will always be my go-to songs to reflect upon tragic, unnerving, unfortunate relationships and their tough break-ups afterwards.
"She said, time to crush this feeling
Writing very long letters as soon as it rains
Ooh, the rain"

"Tell me why do we always get what we want
When we don't want it no more
And how do you feel now
We still sound so sick
Still fish around, in waters you know so well"

"Lions", "Means Of Escape", "Burning Skies", "The Moment Of Fear" are on point as a gothic ballads. They are as good as any best Bauhaus hits. While songs akin to "War", "Happiness", "The Never Never (Is Forever)" can roll your over with edgy questions in regards to war activities and existentialism. But, yet again, my favorite "Twist" stands out as otherworldly "gothic rock on acid" thing - it's simply ingenuous both lyrically and sound-wise. ToT even pre-dated Marilyn Manson with their religious satire in the "Christian Says" single. Need i say more to proof how they were not only ahead, but beyond their time?!