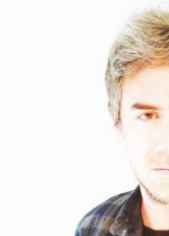 Rephlex Records released his new full length in 2013, “Good Programs (To Be Coloured in Yellow)”, as well as a collaborative EP with Heinrich Muller aka Gerald Donald from the Detroit group DREXCIYA, nominated in 2013 by Fact (UK magazine) in the 50 greatest 10″ records of FACT’s lifetime. Both of the records were published worldwide by BMG Chrysalis.

"April", a 17 studio track album, is one of the official Record Store Day releases in April 2017, released by Studio K7 and published by BMG Chrysalis.

April 12, 2020
As unique and dynamic as Kraftwerk. Simple programing but not simple in structure and sound. Amazing sonic templates for the time. Elegant, futuristic and beautiful. The sophistication of the songs will put you in awe. Ambient idm, first generation.

September 2, 2017
I love Bochum Welt's music so much that I don't give up hope on the day, that Gianluigi Di Costanzo will finally release his early, vinyl-only work digitally. By all means, he should.
See 2 replies