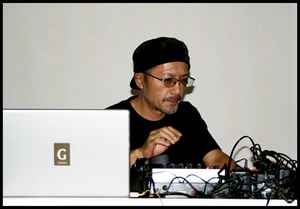 Real Name:
中嶋昭文 (Nakajima Akifumi)
Profile:
Aube was the solo project of Akifumi Nakajima (January 13, 1959 in Kyoto, Japan – September 25, 2013), begun in 1991. Taking a minimalist approach for his recordings, Nakajima used simple source sounds which were fed into his system, then heavily processed into a vast dimensional landscape of sonic textures. Source sounds ranged from the organic sounds of gurgling water, to isolating elements of technology, such as the curious hum of luminous lamps. The result is a mixture of controlled manipulation and beautiful accident. In May 1992, Nakajima started G.R.O.S.S. - his own cassette label dedicated to releasing experimental music, and noise, in addition to his own recordings as Aube. He worked on recordings with artists from Japan, Europe and the United States in various different capacities and designed packaging for many other releases.
Sites:
rgnz.free.fr, Wikipedia
Aliases:
Akifumi Nakajima, G.R.O.S.S.

this man's impact cannot be overstated. he deserves a big retrospective boxset like Skin Crime.

Ηighly structured musique concrete starting from simple sound sources that follow a strict discipline to climax into a symphony of delicate complexity. The overall effect is mostly soothing and deeply meditative. Sound Koans for the modern man.
Reply Notify me 3 Helpful

December 30, 2016
For those interested, Shrine.jp have started to re-release Aube's early Cassettes onto CD now.
Reply Notify me 5 Helpful

October 6, 2016
He created very intelligent noise music. Sometimes very hypnotic and harsh. I'm really shocked that he passed away so early. He left Testament in his sound.
Reply Notify me 2 Helpful

September 11, 2014
This guy was truly a genius, using literally anything he can for source material. An inspiration to experimental artists everywhere. If Aube taught us anything, its that we should all be pushing the envelope and trying new things with noise.

Incredible sounds from a true original. . Aube lives in the sound

December 5, 2013
Rest in peace Aube, may your influence reach to many people in the world of noise.
Reply  See 1 reply Notify me 5 Helpful

September 20, 2011
does anyone know anything about what he's doing now? No new music since 2007. Latest release, Variable Ambit, is from 2003
Reply  See 3 replies Notify me 5 Helpful