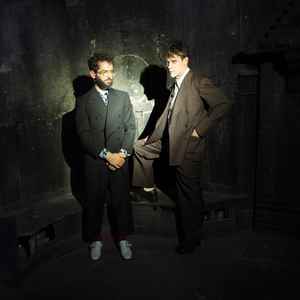 Profile:
MGMT is an American psychedelic rock band founded by Benjamin Goldwasser and Andrew VanWyngarden. After the release of their first album, the members of their live band, Matthew Asti, James Richardson and Will Berman, joined the core band in the studio. Formed at Wesleyan University and originally with Cantora Records, they signed with Columbia Records and Red Ink in 2006. On October 5, 2007, Spin.com named MGMT "Artist of the Day." On November 14, 2007, Rolling Stone pegged MGMT as a top ten "Artist to Watch" in 2008. The band was named ninth in the BBC's Sound of 2008 Top Ten Poll. They were also named as Last.fm's most played new artist of 2008 in their Best of 2008 lists.
MGMT's first album, Oracular Spectacular, debuted at No. 12 on the UK album chart, No. 13 after 34 weeks in the New Zealand RIANZ charts, number six on the Australian ARIA Charts, and hit number one on the Billboard Top Heatseekers chart. It has also been named the 18th best album of the decade by Rolling Stone magazine. It was named the best album of 2008 by NME. MGMT also appeared prominently in Australia's Triple J Hottest 100 2008, coming in 2nd with "Electric Feel", 5th with "Kids" and 18th with "Time to Pretend". MGMT was nominated for the 2010 Grammy Award for Best New Artist, and their track "Kids" was nominated for Best Pop Performance By a Duo or Group with Vocals. These are the first Grammy nominations for the band. At the 2009 Grammy Awards, the Justice remix of "Electric Feel" won the Grammy Award for Best Remixed Recording, Non-Classical. Their second album, Congratulations, was released on April 13, 2010. In January 2011 they began work on their third album, which was released in 2013.
Sites:
whoismgmt.com, Facebook, instagram.com, MySpace, whoismgmt.tumblr.com, Twitter, Twitter, YouTube, YouTube, Wikipedia
Aliases:
Fish Zoo
Members:
Andrew VanWyngarden, Ben Goldwasser, Hank Sullivant, James Richardson, Matt Asti, Will Berman
Variations:
Viewing All | MGMT
The MGMT Company, The Management

If you go to the MGMT official website it gives you various options . . .

I have to say, since this is a site that focuses on discographies and the rating of releases:

This band has consistently produced great sounding, well remastered albums (especially LPs) for a long time now. Their remasters are actually well-made and their first presses are not cheaply made at all.

MGMT are two charming American hobgoblins who surfaced to the world in late 2007 with a stunning first album named "Oracular Spectacular", following on spring 2010 by a more leftfield and experimental one entitled "Congratulations".
Miles above any concurrence for their ability to write songs and harmonies, but also lyrics with meaning and a genuine, quite profound poetic touch, the duo also excels at more or less hidden musical citations and are therefore a treat for music lovers who will spot delightfully a wink to obscure references, generally from the 60's, 70's or 80's pop misfits vaults.
They are in this sense quite representative of a generation that had the ability to dig instantly on very obscure and varied music from all around the world, and mix all these eclectic influences without "levelling" the cool from the uncool, courtesy of the 2000's internet facilities and lack of self-consciousness.
The band had to face two handicaps or misunderstandings so far : 1/ their unability to properly join any "scene", play the "indie game" and therefore being held as 100% credible and "cool" by the tastemakers of their times (ie Pitchfork etc) and 2/ being quite shy and not so "show off" on stage.
In my book, these two minor flaws should not prevent their exceptional talent to blossom even further and confirm them as some of the pop geniuses of their time.