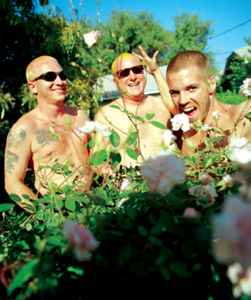 Sublime disbanded after their singer Brad Nowell died of a heroin overdose on 25th May 1996, only two months before their self-titled album was released. In 1997, members would formed Long Beach Dub Allstars. In 2009, the surviving members Bud Gaugh and Eric Wilson attempted to reform Sublime with Rome Ramirez as their new singer and guitarist, but due to a lawsuit, the band was forced to change their name to Sublime With Rome.
Sites:
sublimelbc.com, sublimespot.com, Wikipedia, Facebook, YouTube, instagram.com, Twitter
Members:
Brad Nowell, Eric Wilson, Floyd Gaugh, Marshall Goodman
Variations:
Viewing All | Sublime (2)
bumS lie

July 8, 2016
It's funny that this Sublime, the only Sublime that matters, is listed as Sublime (2)! Bothers me a little! That's like listing Bob Marley as Bob Marley (2) or the Clash as the Clash (2)! There should be some kind of discogs guideline preventing certain bands or artists that have duplicate names to appear first on a list if they are drastically overpowered in stature and recognition by a band or artist that deserves to capture that number one spot. I'm possibly being nit-picky here..but I mean come one man..it's SUBLIME!!!!