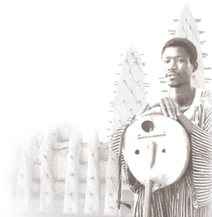 Real Name:
Azongo Nyaaba
Profile:
Captain Yaba was the professional name of Azongo Nyaaba, who was born and raised in the dry grasslands of the far north of Ghana. He was four or five years old when he started playing the koliko (also known as the molo), an ancestor of the banjo. Mac Tontoh of the internationally famous band Osibisa brought Nyaaba to the Ghanaian capital, Accra, and there he began performing with various groups and as a soloist under the name Captain Yaba. In 1994 he recorded his second album of traditional Fra Fra songs, this one with a modern funk band called Ninkribi, and that raised sufficient interest abroad for Captain Yaba & Ninkribi to tour Europe. After returning to Ghana, Captain Yaba continued to perform on his own and in groups, but in 2001 he died of tuberculosis at barely past the age of 30. Two years later RetroAfric reissued the Captain Yaba-Ninkribi album, duplicating five of the tracks in their rough and even funkier mixes.

In his short musical career Captain Yaba captivated listeners with his two-string gourd guitar grooves, and especially with the track Yaba Funk. He makes his instrument, the koliko (aka molo or xalam) sound like the root of all funk.
Captain Yaba was a Fra Fra from the northern Ghana town of Bolgatanga where the country and the culture have more in common with Sahelian neighbours than the central and coastal regions where highlife rules.
Yaba Funk Roots is a reissue of his 1996 album Tinanure, produced by Francis Fuster, the celebrated Sierra Leonean percussionist. Unfortunately Yaba died soon after that CD’s release. This RetroAfric reissue has been augmented with five tracks from the original Ghana sessions, which retain the vital edge of griot funk at which Yaba excelled. Call them premix, call them de-mix, these tracks bring added delight to a type of African music which is rarely heard in the West.
Sites:
retroafric.com, forcedexposure.com, forcedexposure.com
Variations:
Viewing All | Captain Yabaa
Azongo, Captain Yaba