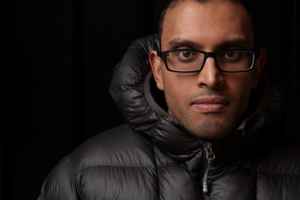 How long is it gonna take before people really start taking notice of this guy's work - I mainly know his Jungle productions - they are immense layered creations that tower over loads of other popular producers. What I like about him is that each track he releases takes you on a journey, a journey full of emotion that feels like you're racing through the stars and then plummet to the depths of the oceans. Each track has something new from the last one and you feel he is really trying to push the boundaries with the current technology but always in a musical way. . While others take the well known tried and tested paths, Fushara is taking us to a place less known but like other pioneers, this results in something ultimately much more exciting. Along with Dead Man's Chest (Alex Eveson), Fushara is easily the highlight of 2017.

Fushara, aka Thushara Goonewardene, is a south London producer whose sharp, experimental sound we have heard only a fraction of through older releases on labels including Plainaudio and Digibeat, and as an artist on Misspent's album Missing Pieces from earlier this year. As his album Tales From A Concrete City drops in September on Make:Shift, we discover more about his distinctive sonic breaks and his initial passage into drum & bass.

Where does the name Fushara come from?

The artist name comes from how some people pronounce my actual name, Thushara. I heard the accent and adopted it.

When did you first get into producing and what made you want to do it?

About seven years ago I started messing around with a basic version of Reason. I had no studio experience or family in the game so it was a huge learning curve. I only really committed to it about four years ago as at the time I didn't have a clue about what most hardware actually did.

Since school I have been into breakbeat but at that time I only had turntables linked up to cheap stereo speakers. There were lots of raves in my area - I loved the drum & bass I was hearing and this was what first made me think about making music.

When I moved to Peckham after school, I was working in a clothes shop in Covent Garden. One of my work colleagues introduced me to a drum & bass crew in Croydon called Lab Creation and we both went to a party they were doing called Pressure. I gave them a demo mix and they invited me to their studio which is where I first saw the studio process and heard beats through decent monitors. They inspired me big time and are we are still good friends.

Your sound is to the left-field/experimental side of drum & bass. Who are your influences both inside and outside of the genre?

It's a hard one to answer as there are a lot! In drum & bass probably stuff on Reinforced, early Tech Itch, Leon Mar, early Adam F. There's some really good new stuff coming out, especially on the more experimental labels. The big labels in the scene have also had a massive impact; I remember a time when I would buy every Ram record on sight!

In my teens I was into loads of rock, metal and breakbeats. Currently, I'm influenced by loads of contemporary instrumental music from Vangelis, Max Richter, Helios, Steve Reich and others.

Your sound is quite hard to define. How would you describe it?

No idea! I'm still trying out lots of things so I feel it changes frequently.

The d&b scene has continually shifted and changed since it was first created as a genre. How do you view the scene at the moment?

There is some great stuff being released and I am still buying drum & bass. I see a lot of squabbling on message boards about artists going too commercial and others jumping onto bandwagons. But ultimately the consumer has the choice to buy the music that is being released. If there is a market for a certain sound then it will get made. I have noticed that marketing in drum & bass has stepped up a notch, especially with networking sites. I like to focus on making my music and it's good that there are some labels cropping up who give artists like me an opportunity to release material.

Of your peers, whose production techniques interest you the most?

Probably Dissident. I really like his drum programming and Martsman's sound is really addictive. ASC has forged his own sound and is doing well from it.

You're from London but your previous releases have been on European labels (German, Hungarian and Dutch) and the forthcoming album is on a Canadian label. Was it a conscious decision to have your music released by labels outside the UK?

No not really, I heard about these labels from their back catalogue and heads up from friends. Coincidentally they got in touch with me and I was more than happy to work with them. I sent Make:Shift a demo after they released the Polska album, received an email from them and it went from there.

Do you feel there are a lot of artists making experimental beats in the UK? How does it fit in with more mainstream drum & bass?

There are a fair amount of experimental artists and it's a community that knows each other. Forums based in the UK attract a more diverse discussion about music. That being said, I have friends who make really good mainstream music and some of them were once considered to be experimental artists.

It's been three years since your first Rising EP on Plain Productions. Have your production techniques or style changed since then?

I used to be really into chopping drums and creating driving patterns with soundscapes. In the last two years I have moved into using drum machines; I still love big soundscapes but I'm trying to keep things as simple as I can.

What production and software set up do you use? There are a distinctly broad range of sounds used on your tracks - do you have a favourite piece of equipment which you use to create these?

I use a custom built PC running Cubase with plug-ins, a Yamaha FS1R and Casio CZ1000. These are both fun to play with but time consuming. I have gone down the software route to save space and to increase work flow. I am a big fan of Native Instruments' Reaktor; there is so much variety in the package and I always find new sounds.

My most treasured bit of kit is my field recorder. I use a lot of sounds from recordings around London which you can hear most distinctly on 3am London Borough, a track on the forthcoming album.

Can you pick a favourite track from the album?

I haven't got a favourite but I can name the track that was a hassle to finish! That would have to be ICU, the oldest track on the album. There was a lot of drum editing involved and it took a while - I made a decision after that to make things easier for myself! I tried to remix it recently and gave up.

All of your previous releases have been digital. How do you see the relationship between MP3s and vinyl and what do you use to record your mixes?

Labels ultimately decide on what format my music is released. There is a romanticism surrounding vinyl and dubplates and although I look forward to my forthcoming vinyl releases, MP3s save space. A friend introduced to me to Serato Scratch Live a year ago and I was hooked. I used to record all mixes on my treasured Technics 1200s, CDJ 800 MK2s and a Pioneer DJM 500. Now I also use Serato vinyl and it's a great tool.

Do you have an opportunity to go to many nights in London? Is there anyone in particular who you have seen that has impressed?

A while back I remember being impressed by Calibre at Plastic People who played a really good set and, more recently, I saw Phil Source play a Source Direct classics set at Rupture. Chris Inperspective throws down something different every time I hear him play and having known Data since our time at Life FM, I enjoy his DJ sets.

What can we expect from your album on Make:Shift and what does the future hold for Fushara?

Expect a bit of variety! I also have a debut vinyl release coming out soon on Pinecone Moonshine with tracks on a CD compilation by the same label. Other tracks are due to be released on experimental label Materializm, with an EP out by the end of the year. I have been working on some collaborations with Infest, so hopefully that will be productive. There are also a couple of remixes for forthcoming tracks on a label that I need to keep under wraps for now!

1. Justice and Metro – 839 Remixes (Modern Urban Jazz – MJAZZLP06)
The remix album, if not done properly, can just be a case of lazy musicians using the hip producers du jour to gain a bit of extra publicity, rather than a genuinely inspired musical exercise. This collection of remixes of Justice and Metro's acclaimed album 839 is quite emphatically not one of those albums. Each of the chosen producers, including Dominic Ridgway, Lo:Tek and Fushura, have done what true remixers are supposed to do – take the music apart and re-assemble it into something utterly different, something that respects the original art yet sheds a completely new light upon it. So we have glitch-hoppy steppers (Lo:Tek's re-rub of Human Thinking), melodic rollers (PFM's mix of Touch Feel) and emotive atmospherics (the Jason Os remix of Solomon) rubbing shoulders with wonky electronica (Caps Lock's remix of Knuckles) and even deep house (the Deep Blue mix of Playloop) in a melange of tempos and styles that, while very different, manage to compliment each other and form a cohesive whole. If you're intrigued and thrilled by electronic music's endless potential to evolve, warp and re-contextualise, this album is essential listening.