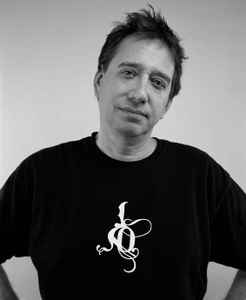 Profile:
American saxophonist and composer, born 2 September 1953 in New York City, USA. He owns the Tzadik record label and has worked with a large number of experimental musicians, particularly in improvised music, modern classical music and jazz, though he has produced music in most styles. As a child, he played piano, guitar and flute. He went to college in St. Louis where he discovered free jazz, before dropping out and moving to Manhattan. There he gave concerts in his small apartment, playing a variety of reeds, duck calls, tapes, etc; almost anything. In the mid 1980s he signed to the Elektra Nonesuch label. Since then, he has released a very large number of records, usually putting out several each year. Zorn's recorded output includes records by two bands of his own, Masada (a klezmer band playing music that is often described as Jewish jazz) and Naked City (an often aggressive mix of jazz, rock and grindcore). He has also worked with musicians like Bill Frisell, Derek Bailey, Fred Frith, Keiji Haino, and Bill Laswell. He has written music for television and film, which has been collected in the ongoing Filmworks series of records on his Tzadik label. Some of these are jazz-based, others are classical. He has also written several "game pieces", in which performers are allowed to improvise while following certain structural rules. These works are in the main named after sports, and include Pool, Archery and Lacrosse, as well as Cobra.
Publisher: Theater Of Musical Optics
Sites:
Wikipedia, britannica.com, MySpace, imdb.com, famouscomposers.net
Aliases:
Dekoboko Hajime, Rav Tzizit, The Composer (3)
In Groups:
Brötzmann Clarinet Project, Buck Jam Tonic, Company (2), Electric Masada, Emergency (3), Fred Frith / John Zorn, Hemophiliac, John Patton Quartet, John Zorn Ensemble, John Zorn Quartet, Locus Solus, Masada (3), Mystic Fugu Orchestra, Naked City, PainKiller (2), Prima Materia, Slan, Steve Beresford His Piano & Orchestra, The Chadbournes, The Frank Lowe Orchestra, The Golden Palominos, The Sonny Clark Memorial Quartet, Toy Killers, Wadada Leo Smith's Silver Orchestra, Weird Little Boy
Variations:
Viewing All | John Zorn
J. Zorn, J.Zorn, JZ, John Z, John Z., John Zone, Jon Zorn, Zone, Zorn, Джон Зорн

OK, this guy really takes the meaning of "Prolific" to another level. And also with good quality amazingly.

November 14, 2017
If I was to judge Zorn on how pretentiously he sometimes behaves during live shows (like Warsaw Summer Jazz Days 1999 - available on YT) it would be definitely -1 out of 5... But I probably shouldn't and focus on his work which is clearly 5.
See 5 replies

August 20, 2015
This man is so very busy, it's not surprising that there are albums that haven't made it onto Discogs yet. Anybody heard "True Discoveries of Witches and Demons" 2015? I'm just curious as to what it might sound like, as he plays, composes, and improvises all over the map and beyond.
See 1 reply