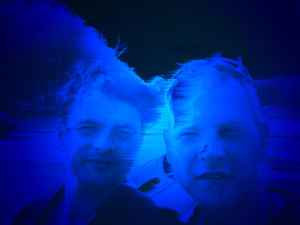 Profile:
Troum is a duo located in Bremen, Germany, established in early 1997. The two members "Glit[S]ch" and "Baraka[H]" were active before in the influential ambient industrial group Maeror Tri which existed from 1988 to 1996.
Troum is the old German word for "dream". The dream seen as a central manifestation of the unconscious symbolizes the aim of Troum to lead the listener into a hypnotizing dream-state of mind, a pre-verbal and primal consciousness sphere.
Sites:
web.archive.org, Bandcamp, chronoglide.com
Members:
Martin Gitschel, Stefan Knappe

When other ambient/drone masters just hold a candle, Troum is itself the Sun.

March 14, 2011
Troum should be forbidden. This music makes 99.99% of other music irrelevant. It's out of this world. Ignis Sacer, Seeing-Ear Gods and Shutûn for instance, contain such beautiful music, any description is an insult to the makers. Stefan and Martin are capable of tearing all layers apart and reach right for your inner core. Devastatingly beautiful!
See 2 replies