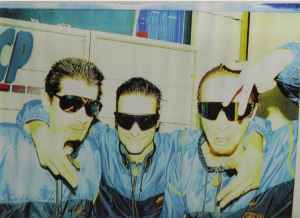 Profil:
"PCP" (Planet Core Productions) was a Frankfurt am Main based hardcore techno production team and label created in 1989 by Thorsten Lambart and Marc Trauner which gave birth to numerous aliases and sublabels. Most notably next to the main label Planet Core Productions is Dance Ecstasy 2001. They disbanded as of late 1996.

Their same-titled band project "PCP" performed live acts with varying line-ups from 1993-1995, incorporating some tracks of other artists (aliases and groups of its members) from their labels but mainly playing own, exclusive and mostly unreleased material.

At events in the Netherlands after 1996 live sets by Marc Acardipane or Marshall Masters featuring an MC were often advertised to be and credited to the act PCP without intention of the artist.
Seiten:
planet-core.com
Aliasse:
Free Base International, Tres Hombres
Mitglieder:
Marc Trauner, Pan Springer, Slam Burt
Varianten:
Alle werden angezeigt | PCP
P.C.P., PCP Squad