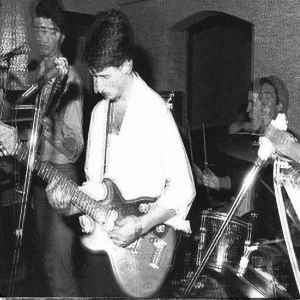 Profil:
English band formed in the fall of 1979, by ex 'Berlin' members Simon Brighton (guitar) and Terry Welbourn (bass), together with 'Stress' musicians, Colin Hopkirk (vocals) and Nick Green (drummer). In 1980, this line-up went on to record two tracks for a local New Wave compilation, 'Household Shocks'. Soon after this release, vocalist Colin Hopkirk departed the band and Terry Welbourn took up the lead vox along with his bass duties.The now 3 piece band were building a solid reputation live with gigs supporting The Psychedelic Furs, the Modettes, Spizz Energi and other big name indies. In the Spring of 1980, the band recorded a 7" double 'A' side single 'The Cinema Clock' & 'Strangers'. Critics were quick to talk up the band including plays on John Peel's Radio 1 show and many favourable reviews.
The band then chose to increase their numbers from 3 to five then to six, with the addition of keyboards, synths and saxophone. Confusing their growing army of fans, this then turned out to be a 'relatively bad move'. Bar the notable live performance at 'Sleaford Rock 80' plus a well received London debut at the original 'Marquee Club' in Wardour Street, the Ships were sinking. In late 1980 they went back into the studio to record songs for a six-track 12" set for release in January 1981 which never saw the light of day. Tired and embittered, the band shrank back down to the 3-piece line-up and tried once again to rediscover the magic with a 7" vinyl single ('Dream' & 'After the Rain - Live') released on the 'Recession' label in April 1981. Sadly, the 80's had moved on, electronics and New Romantics were taking over the world of music - rock n roll seemed doomed. The Sinking Ships original line-up split, with some of the members moving out of Lincoln to London with just Terry Welbourn left to pick up the flotsam. During the 80's Terry continued to play live under 'The Sinking Ships' name with numerous lineups adding guitars and drums. But there have been no further record releases since 1981.
Seiten:
Bandcamp
Mitglieder:
Charlie Anderson (10), Colin Hopkirk, Colin Moss, Nick Green (2), Simon Brighton, Steve Orient, Terry Welbourn, Tracey Horseman
Varianten:
Alle werden angezeigt | Sinking Ships
Sinking Ships 1980, The Sinking Ships