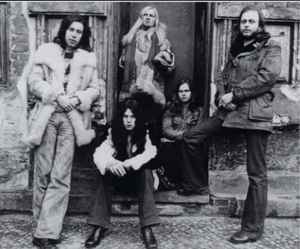 Profil:
Agitation Free was formed in 1967 by Lutz 'Lüül' Ulrich, Michael 'Fame' Günther, Lutz 'Ludwig' Kramer and Christoph Franke. Famous for their multimedia light shows, they became the house band for the infamous Zodiac club in Berlin. In 1968, they were joined by vocalist John L., who was fired within in the year, possibly for his naked stage antics. In 1970, Ludwig Kramer left and was replaced by Ax Genrich. Likewise, Christoph Franke left this year to join Tangerine Dream (who like Ash Ra Tempel shared practice space with Agitation Free). To replace these losses, the group recruited Jörg Schwenke and Gerd Klemke. Klemke was not to last long though, and the group finally stabilised in 1971 as a quintet with the addition of Michael Hoenig and Burghard Rausch. In 1972, the group toured Egypt, Lebanon, Jordan and Greece during which time they made a recording which appeared on their first LP "Malesch". In March 1973, Schwenke left the group and was replaced by Stefan Diez. At the same time, a second drummer, Dietmar Burmeister joined the group. This line up was featured on the posthumous release "Last", and without Diaz the group recorded their "2nd" LP in July 1973. Shortly after this Diez quit and was replaced by Gustl Lutjens. The group made their final recordings in February 1974, which also turned up on the "Last" LP. The group disbanded after a goodbye concert in Berlin, November 1974. However, in recent years the band has reformed with original members and played a concert in Tokyo at beginning of February 2007.
Seiten:
agitationfree.com, agitation-free.de, Wikipedia, progarchives.com
Mitglieder:
Ax Genrich, Burghard Rausch, Christian Kneisel, Christopher Franke, Daniel Cordes, Dietmar Burmeister, Gustl Lütjens, John L., Jörg Schwenke, Ludwig Kramer, Lutz Ulbrich, Michael Günther, Michael Hoenig, Micky Duwe, Stephan Diez