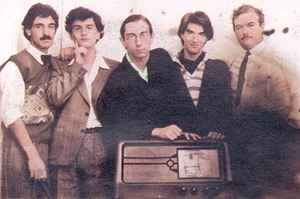 Profil:
RADAR (usually written in block capitals) were founded in 1981, signed a contract with WEA and released a 7" single and an album. Originally, the contract was for more albums, but at some point WEA decided not to support the project anymore. In the early 1980s they have appeared in various TV programs on Italian national TV RAI including Domenica In, Discoring and the festival "Un disco per l'estate 1982" (Saint Vincent Estate), in which they were among the "young" artists and performed the album track "Una Splendida Emicrania".
A new RADAR track appeared as a digital single in 2016 ("Plastic People", with lyrics by writer Aldo Nove), followed by the cd/digital album "re-pop".
Seiten:
Facebook, Wikipedia
Mitglieder:
Alessandro Ceradini, Catone Muchetti, Gaetano Lonardi, Gionata Lao, Joyello Triolo, Nicola Salerno (2), Vittorio Zibordi