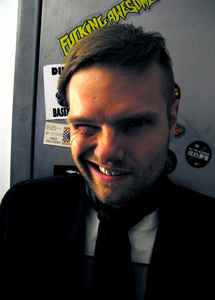 Bürgerl. Name:
Mathis Mootz
Profil:
Mathis Mootz (b. 18 August 1976 in Wetzlar, Germany) served an apprenticeship in classical music and was a member of the boy's choir of Windsbach. After studying music engineering at the SAE Institute, Mootz worked with the experimental hip hop/illbient label Chrome, an offshoot of Force Inc Music Works. Over the course of several drum and bass albums and many singles, and as A&R manager for Chrome, later renamed Position Chrome, Panacea became known for pushing the bounds of the drum and bass genre into industrial and hardcore territory, and for energetic DJ sets which fused these genres in a live setting.

10. Juli 2022
Mathis Mootz is a tireless actor which can awaken furious stomping and high jumps even in deaf bores.
I'm in DnB not so long ago. "The Panacea" impresses me more with its quality collaborations than African verses,
variety vocals, trend clothes and annexation 99% of the DJ booth area and he's not the only one... But!
[Word Of Toth / Cryptonomicon / Power Of Darkness / Uberbomb and a plate on OFFKEY#004] - are very worthwhile things.

9. August 2019
One of the best names in the Drum&Bass style . His earlier works is the best and only his three first albums are what made Panacea the guy we know with ;

- "Low Profile Darkness" a real stomper as album , sadly some Records has some errors similar as the CD's but it gives it's charm to it .

- "Twisted Designz" to me it is his personal work some tracks would be great in some post-apocalyptic science fiction movies . Not sure why some dislike that Record/Album imo it's lesser commercial than Low Profile Darkness .

- "Phoenix Metabolism" is an okay-ish album but to me it falls flat and i dunno why he started to change his roots of music . Some tracks are great others are plainly boring . Guess he was boring already of what he was doing ??

His Records on Position Chrome are very great some of them are rare to find .

But yes after Phoenix Metabolism he hasn't done many memmorable stuff to remember at .

12. April 2017
I think this guy is one of the biggest name of whole electronic music scene

One of the BIGGEST names in drum and bass scene.