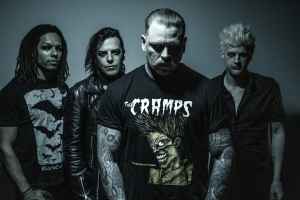 Profil:
Combichrist was formed as a side project of Icon of Coil frontman Andy LaPlegua. Intended as an outlet for more aggressive material, Combichrist became Andy's full-time focus after the disbanding of Icon of Coil in 2006. Combichrist has since gone on to become one of the more popular underground dark electro acts.

Starting with their 2003 debut, The Joy of Gunz, Combichrist has earned a passionate following. In 2006, the band incorporated live drums and keyboards. After the release of Scarred, guitar was added. The band has played as a solo act, a duo, a trio, a four-, five-, and six-piece band, and even with a full orchestra backing them. 2012's 'Evolution' tour charted this by having band members join and exit the stage as necessary to replicate various moments in the band's history.

Over the years, Combichrist has shifted from a solely electronic act to an industrial band fusing aggrotech and hard rock/metal. Starting with 2013's No Redemption (written for DmC: Devil May Cry), Combichrist began incorporating guitar and live drums in their studio albums. No Redemption showed the group experimenting with more traditional metal elements. 2014's follow-up, We Love You, blended electronica and metal, while 2016's This Is Where Death Begins moved more towards industrial.

to me, as a 50 years old EBM/Industrial fan born and raised with 242, Cabaret Voltaire, Nitzer Ebb, DAF, Skinny Puppy, Split Second, NIN, PArade Ground, Cass. Complex etc etc etc, the Combichrist story is... was a sad story.
once a true pioneer, one of the most originals EBM/Industrial/Agro sounds I have ever heard. I can't believe that this guy has been able to make stuff like Electrohead, Shut up and Swallow, Blut Royale, Sent to Destroy... when I bought their Sex Drogen Und Industrial EP like 17,18 years ago I said to myself, this genre still has something to offer.

And then, Today We Are All Demons ( I've bought the 2nd day after is release, not even bothering myself withe singles). For a few strange things from the album, I've just thought it was just... an honest mistake, or two. Then "Making Monsters" came... I've got it: clearly this guys means for real! He's gone... Left... He's no more...Andy has made Combi to sound like thousands and dozens and hundreds of thousands of other... don't know... hard rock bands? industrial/rock? how TF you call... THAT?!

He was the one! He was like NOBODY else! now he's nobody.

he's just a... guitar band with hairy, headbanging fans, dozens and hundreds of thousands of them, coming 25 years after KMDFM, Ministry... "Fucked Up Music For Fucked Up People" as it says on the back of SDuI EP. now it sounds like a dream.
So be it. it's been nice to be there when Combichrist were the one and the only. too much time spent with Ramstein I guess... apart of taking over Till's babe.... :)

anyway, "live and let live". as far as I'm concerned this guys is a boring, unimaginative, unambitious mediocre who has realized that in 10 years he'll be sick of all that shit and retired.

17. September 2015
Combichrist was my gateway drug to outside of industrial in the electronic music umbrella. I saw them open for KMFDM on their Haur Ruck Zuck Tour on Halloween night, 2006. They fucking blew KMFDM *clear* out of the water with their live performance. I had heard some material of Combichrist before from the Everybody Hates You album, but at the time it just sounded like darker, repetitive techno to me- not thoroughly impressed.

Their live show completely changed my opinion of the band, and gave me the impression that they were more of a live band. Next album came, and in my opinion the band got better. What the Fuck is Wring with You People? is still my favorite Combichrist album. The band's logo became my first tattoo in 2008 when I joined the Marines.

I saw them as many times as I could, and got just as butt hurt when I'd miss a show/ tour because of training. I missed the Das Bunker 2008 show when I was stationed in So-Cal, and then subsequently missed the 2008 Gothic Cruise. That year saw the premier of Sent to Destroy- to this day, still one of my favorite Combichrist songs.

Today We Are All Demons was a monumental album that took them to new heights at the start of 2009. They toured with Wes Borland's Black Light Burns and started a very fruitful friendship. On a few shows of that tour, was the first time they brought guitar into Combichrist. The third single Scarred had an updated mix with Wes' guitar on it. The touring cycle happened so fast and relentlessly, it was like you blinked...

...and Making Monsters was released and the band went on tour after tour after tour. Making Monsters sounded huge. Follow the Trail of Blood blew me away, as I had been a Bleeding Through fan for 7 years at that point. But overall, I felt the album was kind of lackluster and became disappointed with it's treatment.

Of course I was thrilled it was on vinyl, but it just felt like a money maker/ taker. The album was short, half of it was questionable. There was no second audio disc, but this time, a first for Combichrist, a DVD. So disappointing was the tracklist.

1. August 2014
I met personally Andy LaPlegua as I am a great fan of his music. Starting by iCon Of Coil continuing with Panzer AG and finally CombiChrist he always give a lot in his projects: I would basically remark one unique thing: he is an artist able to produce something that I would like inconditionally: I can purchase his work without a doubt, without hearing, and for sure will contain elements which will trap me: the production, the electro bases, the strength. Thanks Andy for you loyalty to your sound and fans. And last but not least: his live acts. AMAZING!

27. März 2013
One of the worst live shows i've seen in 2011. Live acoustic drummers, let alone 2 of them, don't suit (former!?) Electronics-only acts well. They were simple but nevertheless catchy in their starting phase; now they're just another "90s-like-Metal-meets-Noise-mashup" formation. I now understand that for LaPlegua it means along something to being-a-bit-back-to-his-roots, but - thanks, i'll pass.

25. April 2012
Best damn band! Always be my favourite and do some seriously Great live gigs! ^_^
They just need to do one thing to make them better and that is... Tour Melbourne, Australia more (Don't really care about the rest, just Melbourne :P)

Andy LaPlegua has been quite busy since the release of his debut album as Combichrist, in September 2003. He has since released four more titles in just over a year and a half, and his compositions have identified him as one of the more versatile and creative musicians in the "main stream" of alternative electronic music, ranging from hard, pounding electro industrial ("The Joy Of Gunz"), to rhythmic noise ("The Joy Of Gunz", "Kiss The Blade"), to EBM ("Kiss The Blade", "Everybody Hates You"), to atmospheric soundscapes ("Everybody Hates You" limited edition CD2).

Unfortunately the same cannot be said about the lyrical content of his work, which is, at best, clichéd and predictable, but anyone familiar with Icon Of Coil, Andy LaPlegua's other project, would have anticipated that much. Combichrist is lyrically, in its simplicity, however, superior to Icon Of Coil, since the lyrics usually consist of one primary catch phrase with one or two support phrases. Often less *is* more. In all fairness it should be kept in mind that English is not this artist's first language, and it is easily acknowledged that his compositions more than make up musically for what they lack lyrically.