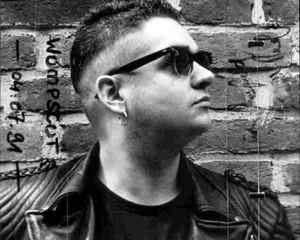 Bürgerl. Name:
Rudolf Ratzinger
Profil:
German Dark Electro-Industrial project, originally active between 1991 and 2017, before Rudy Ratzinger put the project to rest.
In late 2020 :wumpscut: returned with the announcement of a new album, to be released in 2021.

:wumpscut: was formed in May 1991 by Rudy Ratzinger, who started writing music after he DJed for a while in several south German clubs and was impressed by his archetype Leæther Strip.
:wumpscut: is a studio only project. Although there were some rumors about live appearences in the past, every time it was just a hoax.
Seiten:
wumpscut.myds.me, web.archive.org, Facebook, Bandcamp, SoundCloud, Twitter, Wikipedia
Aliasse:
Herbert Braun Und Die Bakterien, Rudy Ratzinger
Varianten:
Alle werden angezeigt | :wumpscut:
:W:, :Wumpscutt:, :w:, W-Cut, Wumpscut, wumpscut, wumpscut:

14. März 2021
He ist back: "Dried Blood and Gomorra"; "Embryodead" will be release at 2.April. At the same time he will release his new Album "Fledermavs 303". All Album are limited.
Antworten  4 Antworten anzeigen Mich bei Antworten benachrichtigen 2 Helpful

Usually I should be sad but honestly this ending was foreseeable. His works from the last years really couldn't live up to his early releases anymore. For me it was always a hit or miss. One album I liked, the next I didnt, the next was somehow ok. Really a mixed bag. For me his worst releases are Boeses Junges Fleisch and Schrekk & Grauss. My favorites are MFAST, Bunkertor 7, Evoke, Fuckit. But his compilations like Dried Blood Of Gomorra or The Mesner Tracks are also great. The rest is pretty much average.

So is he overrated? No, I don't think so. I rarely seen such a diversified discography. Also his limited fan releases such as box sets are really high quality and cool! Sometimes I think he re-released some releases way too often but oh well... Some sets often had stuff like Soylent Green Energy Drink! Really cool items. However, releasing an album every year is too much in my opinion. He should have maybe went with all 2 years. The audio quality seemed to have suffered from this.

Another thing I really never got is that sheer amount of remixes included on every limited edition of the album. They are rarely good and mostly are done by always the same artists. Absolutely boring and uninspired. I don't like remixes anyway but this is seriously the worst I have seen with an artist. Why anyway? To include more music? Great... Guess quantity over quality counts here. I would much rather see only a few selected very good remixes or b-side tracks and mixes. At least there was sometimes a different mix done by :Wumpscut: himself.

Recently he released all of his releases on Bandcamp. Sometimes with new tracks or whole new compilations. There seem to be a few tracks missing like the Die In Winter Extended Mix from the Bunkertor 7 US Edition but mostly it seems to be complete. Also some tracks are incorrectly tagged. Well, guess this Bandcamp Discography was rushed. Still, cool to have everything archived digitally for the future.

I guess in the end we really have to say goodbye to one of the most interesting Electro-Industrial projects out there. I wonder why he decided to stop. Maybe he had enough of this one year album release schedule? Even if so, why not simply releasing them all two years. Or maybe not enough people buy the music anymore? I know that those studio only projects really have a hard time. People can't earn that much anymore with such projects. Most of the money that an artist earns, actually comes from live gigs. Not even kidding. This is because less and less people buy physical mediums and some simply get them for "free"... One of the down sites of the WWW. Those huge box sets also don't help the cause since their production costs makes it pretty much the same. Spotify also helps destroying artists. They get a joke from those listenings plus small scene bands barely earn cents there anyway. I will never use this evil service. I prefer having my lossless CD or Digital mediums.

30. März 2015
You'll hear a lot of criticism of :W:'s later 'more melodic' or 'pop' material, but I feel the need to defend the post-Evil Young Flesh (or Boeses Junge Fleisch) albums: Rudy pretty much defined a new generation of harsh or 'terror' industrial-EBM for the 90s with 'MFAST' and the albums immediately after it which had a morbidly noisy dancefloor quality, but the song-writing was always his strength.

'Pop', although used in the derogatory sense, is a good way to describe Rudy's mid-to-late material as he focuses on structure, melody and lyrics; the subject matter, however, remains similar. What you get is a lot adult-themed, unpleasant and provocative subjects (genocide, racism, sex, murder, perversion and a mix of all of the above) wrapped up in (still harsh) dancey, catchy melodies which, for me, makes them all the more sinister. Oh, so you've put some challenging lyrics to scary noise? Damn, that's original. What Rudy's done is expand his oeuvre beyond that, compelling the dancefloor with his bizarre, irresistibly memorable vision of true 'gothic' pop. The main difference, perhaps, is that many songs are enjoyably tongue-in-cheek (usually a couple per album), showing that a real comfort and immersion in his subject matter to the point of absurdity. Wumpscut doesn't take himself too seriously. Happily, he remains ever-controversial without the need to explain himself.

In short, if you're a newcomer then beginning with the opening triptych of 'MFAST', Bunkertor and Embryodead will give you a taste of the finest European EBM the 90s produced. When you're emotionally exhausted by the terrifying weight of it all, pop on 'Wreath of Barbs' for some lighter, but no less monstrous tunes. Give the later :W: a chance!
Antworten  1 Antwort anzeigen Mich bei Antworten benachrichtigen 5 Helpful

7. April 2010
Probably the best industrial artist you'll ever hear in a club, and he doesn't even play live. Such a shame. Well, the review by perigoso says it all: Rudy started playing with experimental heavy metal mixed with polar-opposite melodies and brutal beats. Mix it all up with killer (pun) album artwork, very adult-themed concept albums, and a dark sound that puts most gothic music to shame and you've got a recipe for music that needs to be in your library.
Antworten  2 Antworten anzeigen Mich bei Antworten benachrichtigen 2 Helpful

27. Februar 2004
Harsh industrial synth driven chaotic mayhem with distorted vocals and scary melodies, one of the noisiest projects I´ve ever heard, but at the same time melodic and with great arrangements, truly noisy MUSIC. Unfortunately his latest releases are flollowing a more mellow path, which kind of disappoints me, personally. Anyway, I like his earlier stuff so much that I named my cat after him...
Antworten Mich bei Antworten benachrichtigen 3 Helpful