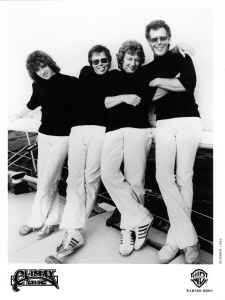 Profil:
Founded in the 60's, by Colin Cooper, Climax Blues Band has always focused on its roots, a unique combination of jazz and blues. The band has released 21 albums and had a Top 10 hit in the UK with "Couldn't Get It Right". That song and "I Love You" were also hits in the United States; "Couldn't Get It Right" reached No. 3 on the Billboard Hot 100 in 1977, and "I Love You" peaked at No. 12 in 1981.

In 1985, Cooper and Glover recruited guitarist Lester Hunt, drummer Roy Adams, and original member Derek Holt to record the Climax Blues Band album Drastic Steps, and this line-up toured in support of the album in the UK, Europe and America. The new line-up soon became established with Cooper, Glover, Hunt, Adams and Neil Simpson in the early 1990s, releasing the live album Blues from the Attic in 1993 and Big Blues in 2004.

Cooper died of cancer, aged 69, in July 2008. He is survived by his wife and two children. He wanted the band to continue, as the other musicians had all been long serving (Glover since 1980, Adams and Hunt since 1985, and Simpson since 1991). Cooper was replaced by singer and saxophone and harmonica player Johnny Pugh, who retired in 2012, and was replaced in turn by vocalist Graham Dee and saxophone player Chris Aldridge.