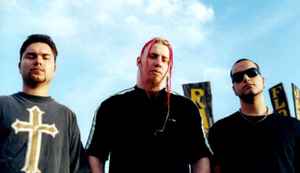 Profil:
In 1992 was recorded demo tape Burned Beyond Recognition of the 8 tracks on which Aghast View demonstrated his concept of music-making. Their music was warmly received by both press and audiences alike.

In 1993, for personal reasons, leaving two members of the group, and remains a permanent part of Aghast View: Guilherme Pires, Denis Rudge and brothers Fabricio and Rodolfo Viscardi. Group acquires a more professional and modern equipment and began work on creating new, powerful and aggressive music. Also, the group works on graphic design and design of their work.

In 1994, Aghast View recorded 13 tracks for their debut album Nitrovisceral, released in September 1994 on the German label Subtronic/Cri Du Chat Records, and in other countries on labels and Discordia Audioglobe. Tracks: Burst In Crossfire, Retaliate, Death Cage and Chemical Warfare often swirled many DJs and rose high in the electronic charts. In the same year he published a mini-album Chemical Storm, with 3 remixes of songs Chemical Warfare and 2mya completely new tracks.

The next couple of years, the group is working on a next album: Carcinopest. Label Cri Du Chat terminates the contract with Aghast View and the group moves to Electro Death Trip Records. In 1997, she recorded the single Vapor Eyes, which contained remixes Vaporise and Torrent Haze, as well as fully included the minion Chemical Storm. Also in 1997, a group Aghast View terminates the contract with EDT and moves to Gashed!, Where in 1999 the album comes out Carcinopest.

In 1999 the band released a collection of remixes Truthead, emerged in a limited edition two-disc, on the second disc were rare and demos Aghast View, as well as one song, remixed a side project of musicians - Biopsy. This idea has implemented a group In Strict Confidence, resulting in a mini-album appeared Industrial Love/Truthlike, with mutual remixes of both groups, and groups of Wumpscut and Swamp Terrorists also released remixes of songs Aghast View.

Third album Phaseknox, released in 2000, was even stronger and more mature than the previous.