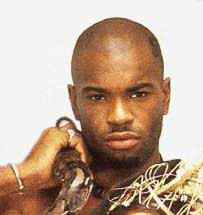 Profil:
Not to be confused with Marcus Thomas, the ex-rapper of Clock.

Marcus Deon Thomas was born on the 20th January 1970 in Los Angeles (in Opelika, Alabama according to some German newspapers), where he started his carreer, taking part to various rap-groups. Then he came to Germany where he created the hip-hop project Mega Dope Posse. With them he released a single entitled I Need Rhythm. Then he became member the dance group Splash (which had some chart success during the years 1990-1991), under the pseudonym Eric P. III.
He performed as rapper in the Pharao project from 1994 till 1995. He had met his future partner Kyra Pharao in München in 1993, as he was still member of Splash. In 1995 he was replaced by Eric Martin after he left Pharao to create the Blue Tribe project.
He has a Corean-Indian symbol of energy tatooed on the shoulder. While being as member of Pharao project, he owned a python called Masiah (or Massai). Ponctuality was not exactly his best quality, according to his former partner Kyra.
He contributed to Odyssey's single Talk To Me under his real name MD Thomas and did raps on E-rotic's debut hit Max Don't Have Sex.
Aliasse:
Daddy-D, Deon Blue, Eric P. III
Gruppen:
Blue Tribe, E-Rotic, Pharao, Splash (3)
Varianten:
Alle werden angezeigt | Marcus Deon Thomas
M D Thomas, M. D. Thomas, M. D.Thomas, M. Deon Thomas, M. Thomas, M.D. Thomas, M.D.Thomas, Marcus Dean Thomas, Marcus Thomas, Thomas