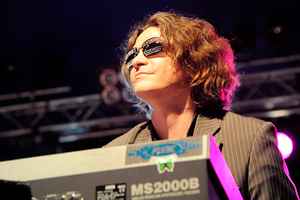 Profil:
Toby aka The Cosmic Pope is probably one of the best known and most prolific keyboardist in southern Germany. He has met Grand Slam in February 1985 and since April 1986, he directs the band. He is thus the only remaining original member of the Bavarian Funkmob and also the only musician who has played all Grand Slam concerts and on all studio recordings here. His style is characterized by surprising and very dynamic sounds, funky rhythm patterns, extravagant solos and live use of the vocoder. In Grand Slam he plays not only the keyboard, he is responsible for many arrangements and compositions, has produced or co-produced all the albums and is the Musical Director. As the heart and chief of the Grand Slam Funk Family he's engine and motivator at the same time!
Toby is in the professional field since December 1979 active, he can point to about 3000 concerts throughout Europe and over 40 recorded releases. He currently is about 120 times a year on stage, is managing the event and booking agency TNT Productions and forwards along with Dandy Dandorfer and Harry Zawrel the music school Basement Music, where he also teaches himself.
He is also Member of following Bands: RIGHTEOUS KILL, Booboos Soulshack, TANQUORAY, DOLO & TOBY, RAMONA FINK GOSPEL GROUP, TOBY MAYERL'S SANSIBAR
Seiten:
tnt-productions.de
Gruppen:
DOLO & TOBY, Grand Slam, Ramona Fink Gospel Group, Snowblind (9), Tanquoray, The Fantastic Pepperboyz
Varianten:
Alle werden angezeigt | Toby Mayerl
The Cosmic Pope, Tobi Mayerl, Toby "Dr. T." Myer