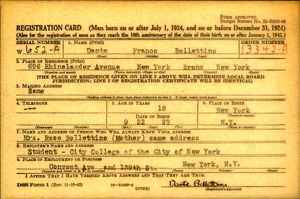 Also credited as a writer of liner notes.

Around 1949, Bollettino founded Paradox Industries, Inc. to release the Paradox (10) label. Another label associated with him and his office at 139 E. 47th Street in New York City was the The Wax Shop label. In addition, Bollettino ran bootleg labels like Jolly Roger (2), Pax Records (4), and British Rhythm Society that reissued dubbed, pirated copies of older jazz recordings to an eager audience of collectors.

When Bollettino released seven Louis Armstrong LPs on the Jolly Roger (2) label in 1951, he was sued for copyright infringement by Columbia, who themselves had reissued four LPs with 48 of their older Louis Armstrong titles in April 1951. Bollettino lost a major court case against Columbia for record piracy in February 1952. His reissue labels were shut down, and he had to pay Louis Armstrong $1,000 in damages.
Varianten:
Alle werden angezeigt | Dante S. Bolletino
Dante Bollettino