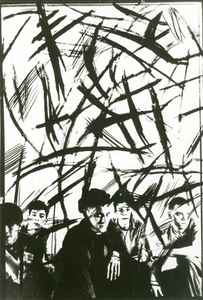 Profil:
23 Skidoo are a British band playing a fusion of industrial, post-punk, alternative dance, rock, and world music. The group was named after an early 20th century American slang phrase that appeared in the work of Aleister Crowley, William S. Burroughs, Robert Anton Wilson and filmmaker Julian Biggs. Formed in 1979 by Fritz Catlin, Johnny Turnbull and Sam Mills, and later augmented by Alex Turnbull and Tom Heslop, 23 Skidoo had interests in martial arts, Burundi and Kodo drumming, Fela Kuti, The Last Poets, William S. Burroughs, as well as the emerging confluence of industrial, post-punk and funk, heard in artists such as A Certain Ratio, Throbbing Gristle, Cabaret Voltaire, The Pop Group and This Heat.

Their first 7", "Ethics" was released in 1980, followed by the "Last Words" 12", produced by Stephen Mallinder from Cabaret Voltaire. A Peel Session was recorded on September 16, 1981 that included other associates Richard Heslop and Tim Soar. Their debut album, Seven Songs, was released in 1982 and is said to evoke the claustrophobic humidity of an African forest. An experimental EP Tearing Up The Plans was produced without the Turnbull brothers, who were traveling in Indonesia. Guitarist Sam Mills and vocalist Tom Heslop left the band soon after, and with the arrival of slap-bassist David "Sketch" Martin following the break-up of Linx, the lineup remained the same until their disintegration in 2003.

With the Turnbull brothers back from Indonesia where they were exposed to Gamelan, the band recruited Aswad's horn section for the "Coup" 12", which featured samples from Francis Ford Coppola's Apocalypse Now. It has been alleged that The Chemical Brothers stole the bass line for their "Block Rockin' Beats" track. The Culling Is Coming (1983 - noted for featuring the band live at the first WOMAD Festival) and Urban Gamelan (1984) followed, criticized at the time for their shift towards more abstract sounds. After having been evicted from their rehearsal space at Genesis P-Orridge's 'Death Factory' the band shifted their focus towards hip hop and released a few singles and a compilation album Just Like Everybody in 1987.

In 1989 the Turnbull brothers formed the Ronin label, and released material by Deckwrecka, Roots Manuva, and Rodney P amongst others. They signed to Virgin Records in 1991 and were able to build a new studio with their advance. In 2000 they released a self-titled LP, which featured contributions from Pharoah Sanders and Roots Manuva. This was followed by a compilation of singles, The Gospel Comes To New Guinea in 2002, and for the first time on CD, reissues of Seven Songs and Urban Gamelan. In 2003 the Turnbull brothers liquidated the company. In 2008 LTM reissued the whole back catalog of 23 Skidoo.
Seiten:
Wikipedia, ltmrecordings.com
Aliasse:
Assassins With Soul
Mitglieder:
Alex Turnbull, Chanan Hanspal, David Michael Bunting, Fritz Catlin, Johnny Turnbull, Pat Griffiths, Peter Martin (2), Sam Mills, Tom Heslop

29. Dezember 2015
23 Skidoo's 'The Gospel Comes To New Guinea' is featured in our film Industrial Soundtrack For The Urban Decay www.industrialsoundtrack.com

6. Juni 2010
If there ever was a musical equivalent to the concept of 'Total Football', 23 Skidoo would be the embodiment of that. Each musician capable of taking the position of the other without dropping a beat.

1. Mai 2010
And based on their 1987 performance in Kortrijk Belgium, one hell of a live band too. They would re-interpretate their songs on the go while taking turns on bass, drums, percussion and electronics and play their music without any breaks between "songs". One big feast of avant garde funk and breakbeats spliced with musique concrete and cut-ups, without getting too academic, too commercial or too alternative.

One of these unique great early industrial groups. Mixing Industrial, Ambient, World Music, Funk , Hip-Hop and Dance, they established soundscapes and beats, which would later be know as Bigbeat or Breakbeat.
FSOL and the Chemical Borthers sampled them. The Chemical Brothers would later get a Grammy for their track "Block Rockin' Beats" which is mainly based on a sampled and ripped guitar-riff from 23 Skidoo's track "Coup".